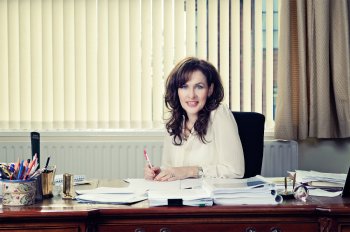 President Michael D Higgins has appointed Professor Deirdre Heenan, Provost of the University of Ulster’s Magee campus, to serve as a member of his Council of State.

She is among seven personal nominees of the President whose appointments to the advisory body were announced by Ãras an UachtarÃ¡in in Dublin today (Fri Jan 6th).

They join the existing seventeen members of the Council, which includes Taoiseach Enda Kenny, Chief Justice Susan Denham and number of other senior Irish government figures.

A distinguished academic, Professor Heenan is an authority on social policy issues, author of several books and studies and is widely known in Northern Ireland as a frequent broadcaster on radio and television.

Originally from near Banbridge, County Down, she now lives in Londonderry and is married with three young sons.

In addition to being Provost, she is also Dean of Academic Development at Magee, and is a key figure in steering the University’s development plans for expansion in Derry.

She said: “I am enormously honoured by this appointment and would like to express my sincere gratitude to the President for nominating me. I very much look forward to participating in the Council of State’s collective work.

“It is humbling to be selected to serve on a panel that may be called upon to provide counsel to the President – a group that already includes so many individuals who have made outstanding contributions to public life on this island.”

“I hope I can contribute perspectives that will be an additional resource to the Council’s activity, for instance as an educationalist involved in social policy research and as a woman from north of the border who is fully conscious of challenges and problems that know no frontiers.”

Professor Heenanhas published extensively in national and international journals, and is a co-founder and former co-director of the Northern Ireland Life and Times Survey which has become a key statistical resource for schools, academics and policy makers.

Her particular areas of academic expertise are devolution, education and social care.

Professor Heenan was appointed to a Lectureship in Policy Studies, to the University of Ulster in 1995, and became a Professor in 2007.

In 2001 she was awarded a Distinguished Teaching Award and this was followed by a prestigious National Teaching Fellowship from the Higher Education Academy in 2006. She is one of just eight National Teaching fellows in Northern Ireland. In 2008, she was appointed as an External Examiner to Trinity College Dublin.

In 2008-9 Professor Heenan spent nine months working as a policy adviser in the Office of the First and Deputy First Minister.

She was appointed by current Northern Ireland Health Minister Edwin Poots to the five member panel of advisers to assist with the N.I. Executive-commissioned Review of Health and Social Care Services in Northern Ireland, which reported in December 2011.

Also among the Council of State nominees announced today is distinguished Irish jurist Catherine McGuinness, who was awarded the honorary degree of DLitt by the University of Ulster in 1998.