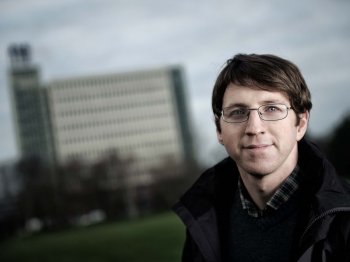 An Ulster student has been invited to act as guest speaker to the Jewish Historical Society of England.

Following a conference held by the University in September 2011, Mark Gilfillan, a final year PhD student, currently working on the first ever history of Edinburgh's Jewish community, was contacted by Chairman of the Programme Committee of the Society, Stephen Massil, and invited to speak to the Society in London later this year.

The subject of Mark’s address will be the life and career of Rabbi Dr Salis Daiches, Edinburgh's Rabbi from 1918 to 1945. The lecture will be held at University College London, in late November (exact date to be confirmed).

This is an extremely prestigious invitation for an Ulster student.

Founded in 1893, the Jewish Historical Society of England is the oldest historical and learned society of its kind in Europe. The Society meets once a month, with lectures on a wide range of subjects relating to Anglo-Jewish history. It also publishes its biennial transactions known as Jewish Historical Studies.

Says Mark: “I was delighted to receive this invitation from the Jewish Historical Society of England. I am eager to share some of the discoveries I have made during the courseof my research on Scottish Jewry and I can't think of a better way of doing so than giving a lecture to the Society in London.

“The invitation was extended to me following September’s Jews on the Celtic Fringe conference which was organised by myself and Professor Pol O Dochartaigh, Dean of the Faculty of Arts.

“The conference attracted speakers from Scotland, Wales, and the Republic of Ireland to discuss the hitherto neglected history of Britain'sJewish communities on the Celtic periphery.

“Prof O Dochartaigh also acts as the supervisor of my doctoral dissertation.”