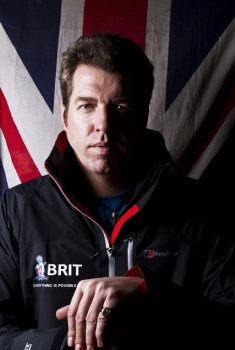 The Northern Ireland section of inspirational British ex-serviceman Phil Packer's gruelling 2012-mile round the UK charity marathon gets under way at the University of Ulster's Coleraine campus on Wednesday next week (23 February), when he sets out to visit all six counties of Northern Ireland.

Phil (pictured) is calling on young people, businesses and the British public to join him as he walks 2012 miles across the United Kingdom during 2012 to raise £15million to build aCentre of Inspirational Excellencefor young people facingadversity.

Phil, who suffered severe spinal cord damage in 2008 and was told it was highly unlikely he would walk again, kicked off his charity campaign in the south of England last month.

Over the course of the year he will make his way through locations chosen by young people in every county of England, Northern Ireland, Scotland, and Wales, including Jersey, Guernsey and the Isle of Man. On the way, he will meet many UK youth who are facing physical and mental adversity, from community groups, schools, colleges and charities who will join Phil at the chosen locations where he will walk.

The money raised will be used to build a uniqueCentre of Inspirational Excellence, a nationwide facility in West Sussex that will provide support to help reshape the lives of young people facing adversity and instil self-belief, self-worth and self-confidence.

The centre will work closely with charities so they can identify young people who face their darkest times and could benefit from attending a residential course. Phil already has more than 50 charity CEOs as British Inspiration Trust advisers who believe in the need for the centre.

Phil will be welcomed to the University of Ulster by the Vice-Chancellor, Professor Richard Barnett , who said:

“ The University is delighted to be able to make its facilities available to Phil Packer and his team, and I want to encourage staff and students to join him in this important and inspirational endeavour.”

While on the University of Ulster campus, Phil will cover 10 laps of a one-mile circular route, beginning at 10am on 23February at the Students’ Union building.

Fifty inspirational figures have also stepped forward so far to support Phil, each of them dedicating 24 hours of their time at the centre when it is built to help young people overcome their personal challenges. Inspirational figures are invited from every sector of society to step forward and gift 24 hours as British Inspiration Trust Mentors to just listen, encourage and inspire young people at the centre.

“My work supporting other charities over the last four years and meeting young people facing adversity identified the importance of regaining self-belief, self-confidence and self-worth. The mental and psychological challenges of facing adversity are immense, and meeting positive role models and inspirational figures who are willing to spend time with young people is a stepping stone to overcoming adversity.

My vision is for a centre that serves young people and brings charities and their best practice together, helping our youth to decide what they want to achieve in life and how to do it,” said Phil.

“Walking 2012 miles will be an enormous challenge. I want young people to take part in it and to show them that they are not alone. I want to connect them with inspirational figures, sporting teams, businesses and the British public,” he said.

“This is about providing a physical legacy for our young people who face their darkest times and in Her Majesty the Queen’s Jubilee Year, together with London 2012, I hope that 2012 British businesses show their support of our youth to create the opportunity for a brighter future. I also hope to involve young people throughout the year and encourage teams to help charities within their communities.

With a wealth experience gained from listening to young people, the British Inspiration Trust defines ‘Young People facing Adversity’ as those aged between 16 and 25:

·   With a physical or mental disability, or medical condition;

·   With injuries including wounded service personnel

The Government estimates 1 in 17, or 600,000, young people are classed as having a disability in the UK.

Phil Packerserved in Her Majesty’s Forces for 17 years and sustained spinal cord damage in February 2008 while serving on operational duty. Subsequently told it was highly unlikely he walk again, Phil has since foundedBRIT (the British Inspiration Trust). He rowed the English Channel, walked the London Marathon over 14 days on crutches, and hauled himself up El Capitan completing 4,250 pull-ups in three days, raising £1.3million for wounded military personnel in 2009. Phil received the Pride of Britain Fundraiser of Year Award and the BBC Sports Personality of the Year Helen Rollason Award.

In 2010, he climbed the Three Peaks during 72 hours for Sport Relief, before smashing his time in the London Marathon by completing the 26 miles in 26 hours for 26 charities, accompanied on each mile by a young person from each charity.

He received the MBE (military) in 2010 Queen’s Birthday Honours List for services to the armed forces, prior to his retirement in March 2010.