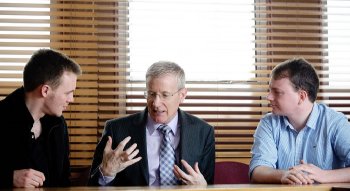 Students on the MA Journalism degree quizzed the East Londonderry representative on a wide variety of issues, ranging from changes proposed by the Boundaries Commission and Scottish Independence, to the role of backbenchers at Westminster and the Arab spring.

Dr Colm Murphy, Head of School of Media, Film and Journalism at Ulster, said the course also has one of the best employment records,with 100 per cent of its graduates now working in the media.

“The programme was developed as a response to technological advances which have resulted in traditional divisions between print and broadcast media being blurred. The University collaborated with the NCTJ to develop a pioneering programme and now others are following our lead.”

Gregory Campbell, who was invited to speak to the students by journalism lecturer, Milne Rowntree, said he was delighted to return to the Coleraine campus.

“It’s always an interesting to meet the journalism students as they are very well versed in current affairs so there’s no hiding place.”