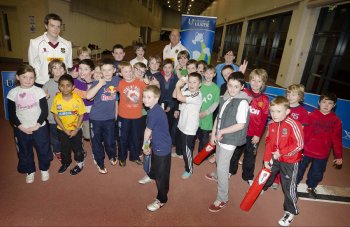 Under 11s whocompleted the first course atthenewly formed CliftonvilleCricket Academy, based at the University of Ulster, have celebrated with a Christmas party.

Thirty children have now signed up to the Academy, a partnership between the University of Ulster and the long-established Cliftonville Cricket Club.

Head of Sports Services at the University of Ulster, Dr Nigel Dobson, said: “We are delighted with the success of the Academy so far and in the year we hope even more local boys and girls to get involved in this exciting sport. This new programme builds on the strong tradition of the University in helping develop top club cricketers such as Kyle McCallan and Andrew White.”

In the new year, U’11, U’13 and U’15 courses will begin at the University’s state-of-the-art Sports Centre in the Jordanstown campus, where the Academy is based.

The world-class sports facility has been used as a training base for London 2012 Olympians and Paralympians as well as the Ulster Rugby squad, Irish cricketers, leading European Tour golfers, motorsport and Gaelic Games stars.

The Academy is headed up by Cricket Development Officer, Andy McCulloch.

He said: “The aim of the Academy is to offer a high level of cricket coaching to children from the age of eight up to 16 years of age.

“The coaching will be aligned with Cricket Ireland to provide all age groups and abilities the appropriate levels of training and coaching to ensure they not only learn the fundamentals of the game of cricket, but that it gets children active and learning new skills.

“Cliftonville Cricket Club put great emphasis on welcoming children from all backgrounds as well as abilities. Whether your child has never picked a cricket bat up or has played for a number of years, the club is confident that the new Cricket Academy can help develop individuals’ skill levels.”

Caption: Children from the Cliftonville Cricket Academy with, from left, Coach Neil Cahill, Cricket Development Officer, Andy McCulloch and Margaret McConnell from the University of Ulster.