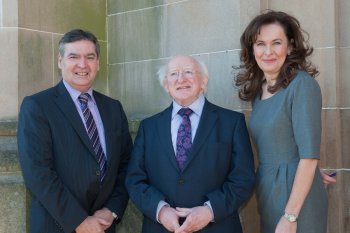 President Michael D Higgins delivered an inspirational tribute to the transformative power of culture when he visited the University of Ulster’s Magee campus today.

The President’s lecture was the centrepiece of a day-long series of engagements in the city.

He was welcomed to the campus by the Provost, Professor Deirdre Heenan, and the Vice-Chancellor, Professor Richard Barnett.

It was the President’s first visit to the University and to the Magee campus.

Taking as his theme “The transformational power of culture”,the President told his audience, which included members of the North West’s artistic community,cultural leaders, civic dignitaries and academics:“Next year, this Maiden City will be transformedtoDerry~LondonderryCity of Culture.

“Ilook forward to the sights and sounds of what will no doubt be a wonderful chapter in the history of this great city.

“This year of celebration will give us an opportunity to affirm culture and creativity in all their possibilities in a way that brings together all communities that share this city, its wider hinterland and indeed, both parts of this island.”

“Creativity is a powerful resource that must be nurtured in our communities, and in doing so, lays the foundation for social cultural and economic trandformation.”

The President praised Professor John Hume’s role and vision as an architect of the Northern Ireland peace process, saying that his contribution was evidence of the positive change that could occur through creative thinking.

“He is an inspirational figure and one to who we owe such a debt of gratitude for his courage in bringingpeace to this place and the whole island.”

President Higgins continued: “The city of Derry and Derry people have in many ways been the creative influences of the peace process and have led the process of transformational change,in many cases before it was embraced in other part of Northern Ireland.”

Culture was an ingredient of society and public policy, he said, “ which needs to be brought in from the margins and not treated as a residual matter tangential to the needs of the real economy.”

Concluding, the President told his listeners: “ I am full of hope for a great future for this island and this city.

“Next year’sDerry~LondonderryCity of Culture is botha worthy recognition of the greatness you have achieved thus far, and a promise of so much moretocome in the future. Ireallylook forward to coming back in 2013 and being part of your wonderful celebrations.”

Responding to the President’s remarks, Provost Professor Deirdre Heenan said:“Ireland has indeed been blessed in the individuals who have occupied theOffice of President – each one a person of integrity and erudition who has given voice to inspiring thought that touchesthe soul of Ireland people be they at home or abroad.”

“Your address today displayed all the characteristics of a very personally and diligently crafted mosaic – a piece of art, even -- which reflected the qualities for which you are renowned – learning, understanding, passion and conviction.”

“As President and as a poet, your words of enlightenment and your vision of the transformational nature of culture are especially welcomehereat this campus which is home to so much of the University of Ulster’s artistic drive,and here inthiscitywhich proudlywears the mantle of UK City of Culture in 2013.

“I hope that you will keep Derry in your heart asa city of cultureand take an active interest in its continued development as a welcoming place of creativity.”

The choir of St Patrick’s primary school, Pennyburn,sang for the President, who took the time to speak to the childrenand be photographed with them. The choir performed under the direction of Ursula Cullen, their musical director.

ENDS
Audio of the President's speech can be downloaded fromhttps://news.ulster.ac.uk/podcasts/HigginsMagee.mp3

A gallery of images from the event is available at:www.flickr.com/photos/universityofulster/sets/72157629525522520/