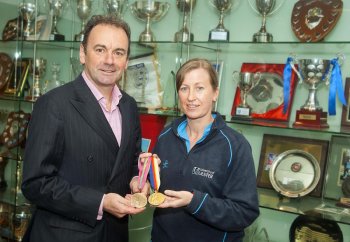 Olympic medals won by hockey player, Dr Stephen Martin MBE, went on display this week at the University of Ulster to inspire students during the 2012 Olympic year.

With less than 100 days until the Olympic Games begin in London, the former Ulster student, who won gold and bronze during the 1980s, handed over his prized possessions to Gillian McMaw at the University’s Sports Centre, Jordanstown campus this week, where they will be displayed.

Dr Martin, from Bangor, said: “The University of Ulster seems the perfect place to have the medals on show. I have strong connections here – I was a second year BA Sport and Leisure Studies student at Jordanstown when I won bronze at the 1984 Olympics in Los Angeles and I have always stayed in touch with the University throughout my career.

“Hopefully, the medals will inspire some of the young athletes, studying or training at these wonderful facilities, to reach their full potential and perhaps compete internationally.”

Dr Martin won gold as a member of Great Britain at the 1988 Olympics in Seoul. He captained the team at the 1992 Olympics in Barcelona before moving into sports administration.

The hockey star has a total of 229 International caps for Ireland and Great Britain.

University of Ulster Vice-Chancellor, Richard Barnett, said: “In a few months Olympic fever will grip the UK and Ireland like never before and here at the University we have these medals, something tangible, that proves that Northern Ireland can produce world class athletes.

“We are delighted that Stephen has chosen the University where he studied and was awarded an Honorary Doctorate in 2001, to place his medals. Even today, at the presentation ceremony, they proved a big draw for passing students.”

Gillian McMaw, Sports Services Co-ordinator, said: “Stephen’s medals are the perfect catalyst to put the Olympics at the forefront of our minds throughout 2012.

“We want to encourage our students and the wider community to get involved with the Olympics any way they can as the Games may never again be held this close to us.”

Caption: Dr Stephen Martin MBE hands over his Olympic medals to Gillian McMaw, Sports Services Co-ordinator at the University of Ulster, where they will be displayed. 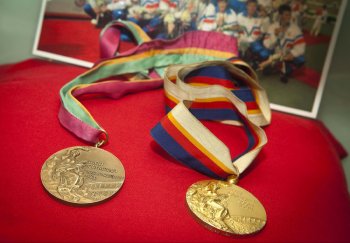