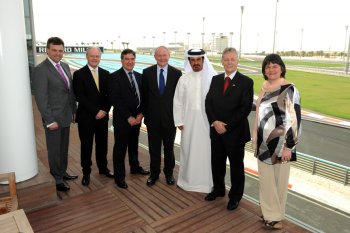 The University of Ulster had talks with Northern Ireland First and Deputy First Ministers in the Middle East this morning about the development of a jointly taught sports management degree in the United Arab Emirates.

In the first leg of their visit, Peter Robinson MLA, Martin McGuinness MP MLA and Enterprise Minister Arlene Foster MP heard details from Ulster’s Vice Chancellor Professor Richard Barnett and the Automobile & Touring Club of the UAE, the governing body of motorsport in the country, about the further development of their relationship, including the prospects for an undergraduate programme based at the Higher Colleges of Technology in the United Arab Emirates, which would be accredited by the University.

The discussions took place at Abu Dhabi’s spectacular Formula One race track on Yas Island where the University of Ulster’s Sports Academy has been working in collaboration with the Automobile & Touring Club of the UAE to develop new standards within motor racing. The work focuses not just on enhanced driver skills, but extends to issues affecting how the sport is managed and run.

Speaking after the discussions First Minister, Rt Hon Peter Robinson MLA said: “The Jordanstown campus of the University of Ulster is one of the leading sports centres in the UK and its role in developing driver talent and in quality controlling the conditions under which motorsport is conducted internationally reinforces our position on the global map. The opportunity for the co-delivery of an undergraduate course in sports management will further enhance Northern Ireland’s relationships in the Gulf region and fits in with the Executive’s strategy to increase internationalisation.

“As ambassadors for Northern Ireland skills and research we are able to take considerable pride in the University of Ulster’s special relationship with the ATCUAE and its potential for future growth."

“The fact that young drivers who emerge with success from the UAE Motorsport Star Programme come to the Jordanstown campus to be groomed for elite motor sport speaks volumes about our expertise.

“The intensive training provided concentrates not just on racing skill, but also upon the importance of discipline, professional focus and psychological awareness. Nothing is left to chance. The star performers in Emirati motorsport are being nurtured and created at Jordanstown.”

Mohammed Ben Sulayem (President of the ATCUAE) added:“We are delighted to have this strong, mutually beneficial relationship with the University of Ulster, and believe it will continue to grow in years to come. This relationship, which is unique in world motorsport, provides great opportunities for the university in terms of research and education, while also bringing a new, academic approach to our sport that increases both safety and sustainability, both of which are cornerstones of the Motorsport Knowledge Institute, the ATCUAE’s new training and education division."

Meanwhile the signing in late 2010 of a research and training agreement between ATCUAE and the University of Ulster is on track to produce results, as Enterprise Minister Arlene Foster MLA pointed out: “Once again our Universities are demonstrating their world class reputation in the areas of research and development and quality of teaching.

“Further investigation into the problem of dehydration at major sporting events will be conducted when the Abu Dhabi Formula One Grand Prix takes place in November, before being completed shortly after at the Dubai International Rally, and the results are eagerly awaited.

“A loss of only 2% bodyweight can reduce task performance by 10 – 20% and the findings produced by this research will contribute towards the formulation of best practice for race marshals working in high temperature environments across the motorsporting world.”

Vice Chancellor Professor Barnett added: “This exciting partnership has been brought about by the personal drive and ambition of Mohammad Ben Sulayem to see motorsport here operate at the highest international level. I am delighted that the University of Ulster is working with him to achieve this ambition.

"The Ministers’ visit to the UAE to support the University of Ulster and Northern Ireland education and business interests in the region has helped us move along the negotiations for the delivery of the first ever jointly taught sports management undergraduate course and I am confident we will be in a position to make an announcement in the near future."

Ulster already has a well-established link with ATCUAE in light of the work undertaken by the University’s Ulster Sports Academy covering all aspects of motorsport over the past decade.

In July 2011 the launch of the competitive UAE Motorsport Star Programme established a training course at Jordanstown for emerging drivers.

The University’s latest research project focuses on the effects of dehydration on support staff at major sporting events.

Dr Gareth Davison, is carrying out the study, he said: “Individuals dehydrate during competitive events, even when it's not particularly hot and dehydration can impair both physical and mental performance leading to severe physiological consequences.”