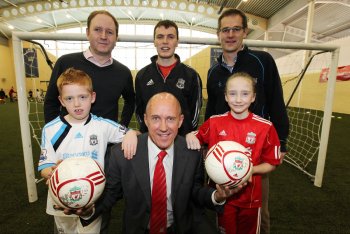 Liverpool legend Phil Neal, the most decorated player in the history of the Premiership club, visited local schoolchildren at the University of Ulster today.

Liverpool FC community coaches have been giving local schoolchildren and teenagers of all abilities a taste of the Premiership at the three-day camp.

Before beginning their coaching sessions, the 70s and 80s soccer star gave them some advice.

His said: "Being a professional footballer is a lovely life but we can't all play professionally. My advice to you is this, when you're playing football never refuse to play in a position you don't like because you might just learn something and that's what made me - playing in different positions."

Adept in both full-back berths, it was on the right side that Neal eventually settled. The full-back helped bring 22 pieces of silverware to the Anfield trophy room and was the only player to feature in the Reds' first four European Cup triumphs.

He became an almost permanent fixture in thelegendary back four of the late Seventies, making a record 365 consecutive league appearances between December 1974 and September 1983.

Neal went on to represent his country 50 times and later became assistant manager under Graham Taylor. He left Anfield with a haul of medals which included four European Cups, eight league titles, four League Cups and a UEFA Cup.

Neal added that participating in soccer schools helps to teach young people respect for others "and that can only be a good thing".

Also at the Academy today were three of the University's Sports Studies BSc students who have been working alongside the Liverpool coaches as part of their IFA Level Two football coaching course.

One of the students, Dominic Earley, said: "I would like to be a full time coach one day so it's fantastic to see first hand how coaches in a top club like Liverpool operate."

Dr Nigel Dobson, Head of Sports Services at Ulster, said: "It's inspiring for the young players to have someone of Phil Neal's status coming in today to speak to them and we're delighted to welcome him to the University."

The Academy soccer schools are held in association with the local charity, Happy Children, which aims to improve the life of children in need. 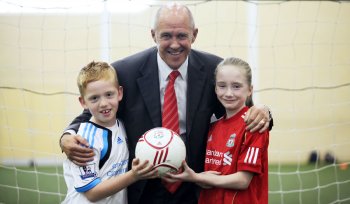