Progress Made in Tackling Fuel Poverty 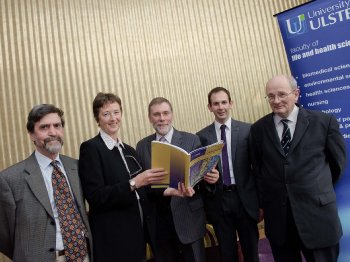 Measures to tackle fuel poverty in Northern Ireland over the past decade have been effective but much more needs to be done, new research carried out by the University of Ulster revealed today.

‘Defining Fuel Poverty: A Preliminary Review’, which was commissioned by the Department of Social Development, was launched at the Stormont Hotel by the DSD Minister Nelson McCausland.

Christine Liddell, Professor of Psychology at the University of Ulster, led the independent Preliminary Review of fuel poverty, which is one of three being carried out across the UK.

She said: “While efforts to tackle fuel poverty in Northern Ireland have made measurable inroads – the severity of fuel poverty remains profound for many households.

“The Preliminary Review concludes, based on the extensive evidence gathered, that past and present approaches to tackling fuel poverty in Northern Ireland have delivered a highly cost-effective programme of housing regeneration. Returns from investment in Warm Homes and similar programmes include:

-       significant savings on energy bills for thousands of households;

-       a widening of opportunities for consolidating partnerships across the public and private sector.

“When all of these gains are taken into account, it is likely that the Warm Homes Scheme and similar fuel poverty programmes are cost-neutral over a lifespan of 15 years. This is because the amount invested in tackling fuel poverty is fully returned through beneficial impacts on health and wellbeing, household income and employment.

“Despite this, there is still much to do. Survey data (NIHCS, 2009) indicates that more than 33,000 households in Northern Ireland need to spend more than a quarter of their income on heating and lighting for their home.”

“The UK Fuel Poverty Strategy (2001) has been in place for a decade, during which there has been major investment, relentless monitoring and intense debate. The current round of reviews is only the first stage in a process of more systemic reflection and reform.

“Northern Ireland is well-placed to contribute to this process. It has a strong grasp of the regional issues that should be taken into the national arena and a networked infrastructure of stakeholders which has the capacity and passion to move forward.”

Copies of the Review can be requested from Professor Liddell at c.liddell@ulster.ac.uk.