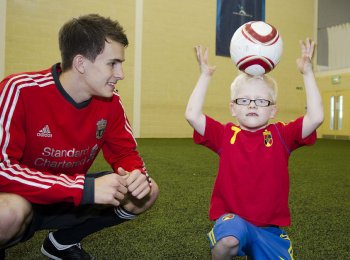 Fifteen visually impaired children were among dozens joining in football training sessions with Liverpool FC coaches at the University of Ulster today.

Aged between five and 16, the local youngsters were being given top class soccer skills advice at the Liverpool Football Academy (LFA) in Ulster’s multi-million pound sports facilities at Jordanstown.

Liverpool FC community coaches will be giving over 130 local schoolchildren and teenagers of all abilities a taste of the Premiership at the two-day camp.

The visually impaired children, whose place at the Academy was sponsored by local charity Happy Children, were being well looked after by Liverpool’s specially trained coaches.

One of the coaches, Matt Pounder, who recently played for England’s visually impaired team himself, said: “These kids get a lot out of the sessions. When they’re at school perhaps they don’t feel as confident as the other mainstream children in a football game, but taking part in a camp like this can give them a few extra skills and helps to level the playing field.”

Brian Gallagher from the charity, Happy Children, which aims to improve the life of children in need, explained there is also a cross community aspect to the camp.

“One of the most important things about these camps is that they are inclusive - we have children here from all parts of Northern Ireland and, of all abilities. Our charity has sponsored a number of children including some from the Lower Newtownards Road where riots took place this summer, they probably would never have met but today they’re playing together.”

Gillian McMaw, Sports Services Co-ordinator from the University’s Ulster Sports Academy, said: “This is the third time that we have welcomed the Liverpool FC community coaches to the University and we are delighted that this relationship has flourished.

“This is a wonderful event for everyone involved and we are only too delighted to provide our state-of-the-art facilities to Liverpool FC and the local community.”

The next Liverpool Football Academy will be held at the University on February 16 and 17, 2012, if you would like more information please contact www.liverpoolfc.tv/soccerschools.