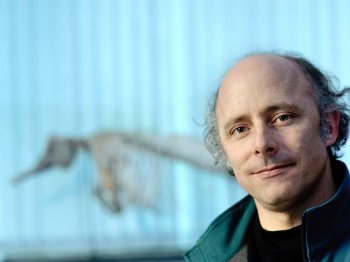 Climate change is subtly altering average yearly and seasonal temperatures on land and water and looks set to have a significant impact on Northern Ireland’s coastal ecology, according to Dr David Schoeman, a University of Ulster marine scientist and co-author of an important international study into ocean warming published today.

Having mapped the spread northwards of slowly rising average sea and land temperatures, the study projects that over the next 50 years some marine life and land-based plant and animal species will relocate to “fresh comfort zones” around the north coast -- that is, to areas with temperatures they need for survival.

The study, which uses global temperature records to investigate the likely climate-change responses of marine life in terms of adapting and relocating, is published in the authoritative journal, Science.

Experts from the UK, USA, Australia, Spain, Germany and Denmark who compiled the study are calling for greater understanding of humankind’s dependence on marine biodiversity and the need for more research funding to provide the knowledge on which long-term response-planning can be based.

The report suggests that while on paper the increase in temperatures seems small, there have already been ecological repercussions. Temperature bands are moving polewards, spring temperatures are arriving earlier and autumn temperatures are coming later. Other side-effects could be even more profound as global greenhouse gas emissions increase.

Dr Schoeman said: “Our study has very significant global, national and local dimensions – from flagging up concern about the future of coral life in parts of the western Pacific Ocean to heightening awareness about the spreading effects of warming around our own coastline.”

The work was led by Dr Michael Burrows, from the Scottish Association for Marine Science, and Dr Schoeman, from the Environmental Sciences Research Institute at Ulster’s Coleraine campus, and was funded by the US National Science Foundation via the US National Center for Ecological Analysis and Synthesis, University of California Santa Barbara.

The study shows that typical spring and autumn temperatures in the ocean are changing more rapidly than they are on land.

Regional variations mean that in many areas marine organisms must respond much more rapidly to changing climate than their counterparts on land. The study examined the speed and direction at which land and marine life must travel to remain in their preferred temperatures.  Whereas fish can swim several kilometres, other bio-organisms such as coral are static.

Dr Schoeman said: “Corals are critically important for marine biodiversity because about a quarter of the species of fish that we know about in the ocean are associated with corals, as are many other forms of marine life.”

The world’s largest concentrations of corals are found in areas of the Pacific near Indonesia and the Philippines, an area also important for other marine biodiversity. For systems like this, the outlook is grim, he added.

Northern Ireland is in a fascinating position, Dr Schoeman explained.  “The warming ocean should tend to shift species northwards along the Irish east and west coasts, converging on the north Antrim coast. Interestingly, temperatures are moving up the east coast at 5 km to10 km per year but at only half that rate up the west coast.”

“Typical spring temperatures around Northern Ireland are arriving 1 to 2 days earlier each decade on the land and off the east coast, by a half to 1 day per decade earlier along the Antrim coast, but they are not really changing at all along the west coast, or even arriving a few days per decade later offshore to the northwest.”

“By contrast, typical autumn temperatures are arriving 2 to 5 days later all around Northern Ireland’s coast but are not shifting at all on land.”

“These complicated patterns may mean little to humans – after all, we’re talking about only a few days change per decade – but they can be important for the seasonal timing of ecological events, which are often quite precise.”

“Despite scientific progress in so many areas, much remains to be discovered in the sea. We cannot allow out of sight to be out of mind. The sea provides us with many services that society still doesn’t fully appreciate, and without an understanding of the changes they are likely to face, we have little capacity to plan.”