Politicians Urged To Slim By Example 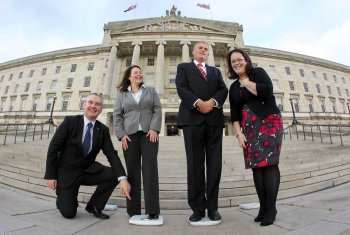 Local politicians were ‘put through their paces’ by a University of Ulster exercise expert at Stormont yesterday, as part of an eight-week weight loss programme.

Professor Marie Murphy, Head of the Ulster Sports Academy, gave the MLAs a talk about the importance of combining physical activity with a healthy diet and encouraged them to walk more each day.

A cross-party group of more than 20 Assembly members from across Northern Ireland have lost almost eight stone in the Safefood ‘Stop The Spread’ campaign.

Professor Murphy said: “When trying to lose weight, a healthy diet is only one part of the energy balance equation that needs to be addressed. Incorporating regular physical activity into your daily routine can increase the potential for weight loss and also provide other health benefits, which will reduce the risk of a range of diseases including cardiovascular disease and type 2 diabetes.

“By sitting less, and making active choices throughout the day, taking the stairs, taking a walk break rather than a coffee break, having meetings ‘on the move’, the MLAs were challenged with trying to accumulate 10,000 steps per day.

Safefood’s Director of Human Health and Nutrition, Dr Cliodhna Foley-Nolan, said: “It’s wonderful to see the progress this group has made over the eight-week programme, not only have they lost weight and become healthier but they are also sending out a powerful message to all adults in Northern Ireland that being overweight is a critical issue that needs to be tackled and that this weight loss is achievable.

“The weight they have lost at this stage we have calculated would be the equivalent of about 100lbs of butter and that’s a great start to stopping the spread! We all know that losing weight really isn’t easy for most people, these politicians have started the process in a sensible way, losing the weight it little by little, this means that in the long term they will be much more likely to keep this weight off.”

The initiative was organised by Safefood, the body responsible for promoting healthy eating and food safety, and forms part a major two-year, all-island awareness campaign called Stop the Spread, which urges people to measure their waist to see if they are overweight.

At present, almost 60% of adults in Northern Ireland are carrying excess weight. The Stop the Spread campaign is a two-year, all-island initiative for more information, visit www.safefood.eu  or call 0800 085 1683.


CAPTION: Northern Ireland’s MLAs have tackled a real heavyweight issue – by shedding almost 8 stones during an 8-week diet and fitness programme organised by safefood.  The drive to trim up is part of safefood’s two-year, all-island awareness campaign called Stop the Spread, which urges people to measure their waist to see if they are overweight. At present, almost 60% of adults in Northern Ireland are carrying excess weight.