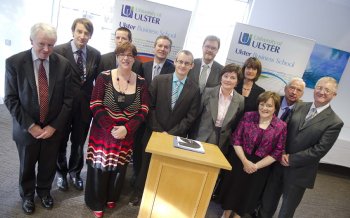 Accounting and Business students were given a boost this week after four top accountancy firms made sponsorship pledges to the University of Ulster.

PwC, Ernst and Young, ASM Professional Services and CIMA Ireland are to sponsor six new awards in the Department of Accounting’s Annual Student Awards for High Achievement, beginning in 2012.

“We are delighted to welcome the new sponsors who will be joining our well established supporters of these Awards, which recognise outstanding academic achievement among Accounting and Business Studies Undergraduate students,” said Dr Armstrong.

“The new sponsored Awards - totalling over £5,000 over the next four years - is a mark of the confidence these companies have in our students and highlights a bright future for accountancy students in the workplace. The new Awards will cover a range of emerging areas including Forensic Accounting, which begins this year and the new BSc Hons Accounting and Law programme”.

He said: “This University provides much more than high quality vocational qualifications. Just as important, perhaps more so, is the huge emphasis that the University puts on the personal development of students, the emphasis on teamwork, confidence building and an awareness of the needs of others in society.

“As an employer of the University of Ulster graduates, my organisation the Audit Office, has benefited enormously from the investment the University has made in the personal development of students. I have had the pleasure of working with a number of recent Ulster Accounting and Business Studies graduates and what I see is confident and creative citizens with a commitment to life-long learning.”

Also speaking at the prize-giving event, Dean of the Ulster Business School, Professor Marie McHugh, said: “Ulster students and graduates of Accounting and Business Studies can take their place on the world stage - in the most recent examinations of ACCA, Ulster students have recorded some of the best performances in the world. That is certainly something for us to celebrate. Alongside this, we are very proud of our achievements in the most recent National Student Survey which secures the Ulster Business School’s position as Northern Ireland’s leading provider of Business, Management, Accounting and Finance education.”

Award winners and sponsors for 2011 were:

Caption: Guest speaker Kieran Donnelly, Auditor General of the Northern Ireland Audit Office (left) with staff from the University of Ulster's Department of Accounting and sponsors of the annual Accounting Awards.