The University of Ulster is giving its students the opportunity to study for a year in the South Pacific island of Tahiti as part of a new partnership with the University of French Polynesia (UFP).

Three lucky undergraduate students studying Marine Science can spend a year of their studies on the island studying the exotic marine environments.

The opportunity has arisen as a result of a new Erasmus exchange scheme between the two universities, which will also see students from Tahiti come to study at Ulster’s School of Environmental Sciences at the Coleraine campus.

Derek Jackson, Professor of Coastal Geomorphology at Ulster’s Environmental Sciences Research Institute, said: “This is an extraordinary opportunity for Marine Science students to undertake a year’s study abroad at an exciting location, ideally suited for examining the marine environment.

“Recent research links between researchers from the University of Ulster and Tahiti have helped cultivate the agreement and should see future research links strengthened because of the exchange agreement.”

The head of UFP’s International Office, Dr Leopold Musiyan, recently made a trip to Ulster to help finalise the agreement meeting with Ulster’s International office.  Hosted by Professor Jackson, who is the Marine Science Erasmus coordinator, he also met Ulster’s Vice Chancellor Professor Richard Barnett, the Dean of the Faculty of Life and Health Sciences, Professor Hugh McKenna and Head of School of Environmental Sciences, Professor Keith Day.

The agreement built upon links established over several years by Professor Jackson and Professor Andrew Cooper from the Centre for Coastal and Marine Research at Ulster with Dr Samuel Etienne in Tahiti who is a world expert on high-energy storm events and coastal change.

Professor Jackson continued: “The agreement also allows for the exchange of graduate students and staff of both institutions and will further enhance Ulster’s international coastal and marine research reputation.”

Dr Musiyan from UFP said: “This is an exciting venture for both institutions and will no doubt result in strong linkages developing in the areas of teaching and research. This is only the second exchange scheme we have established with the UK and look forward to seeing it flourish over the coming years through both staff and student exchanges in both directions.”

Students will be eligible to be on this exchange programme from Sept 2011. 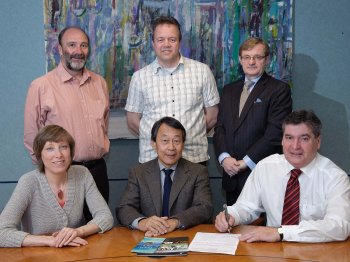