Primary Pupils Get a Buzz from Learning 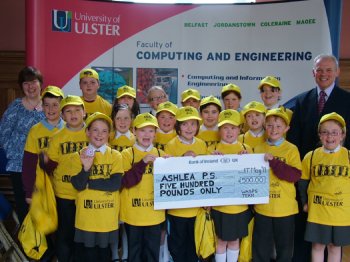 Local primary school children had a first taste of university life, thanks to the success of the University of Ulster’s WASPS programme at the Magee campus.

The programme focused on providing a series of ‘hands-on’ practical workshops to encourage the youngsters to express their creativity and hone up their business skills using technology.

Since January 2011 a total of 24 teams from the four schools have been working on creating their own movies based upon their chosen topics, such as Healthy Eating, Space, 3D shapes, Angles, the Olympics and Around the World.  In addition to working on their movies in their own schools during the programme, the groups also attended a series of half day workshops at Magee. The workshops focused on idea formation, planning and implementation, using techniques such as storyboarding, scripting, animation and movie-making.

The WASPS programme, which is led by Computer Science lecturer, Dr Sandra Moffett, is funded by the University of Ulster’s Access Agreement.  Now in its second year, Dr Moffett says the standard of work from the pupils is ‘exceptional’.

“All children involved in the project embraced it wholeheartedly and rose to the challenge. The WASPS project is like a breath of fresh air for staff and to see such young children applying digital creative skills is very encouraging for the future of ICT.”   Mr Derek Woods, Dr Jose Santos and Dr Catriona Carr, all from the School of Computing and Intelligent Systems, Magee spent two days considering the storyboards, movies and presentations. After much deliberation, they decided that first prize should go to ‘Fitness Fantatics’ from Nazareth House for their movie ‘Healthy Eating’. Each member of the winning team - Aodhan Wade, Dearbhla Duddy, Andrew Redden, Calum McCallion and Shane McIntyre – were awarded an got an iPod Touch.

Ashlea Primary School was named overall winner for their enthusiasm, dedication and contribution to the project. The prize, a cheque for £500 was presented to School principal, Mr WT McElhinney, who was also the teacher supervising the project.

Expressing his delight at winning, Mr McElhinney said: “The WASPS project, which was  supported so enthusiastically and purposefully by staff from the University of Ulster has been a most stimulating and satisfying learning experience for us all and we are totally overwhelmed to be the winning school and greatly appreciate your investment in Ashlea PS.”

Other members of School of Computing and Intelligent Systems team who deliver the WASPS programme are Mairin Nicell, Anne Hinds and Karen Lee. The programme is funded for three years and during that time, a total of twelve local primary schools will have access to expertise in the School of Computing and Intelligent Systems at Magee. The next WASPS project is due to start at Magee in January 2012.