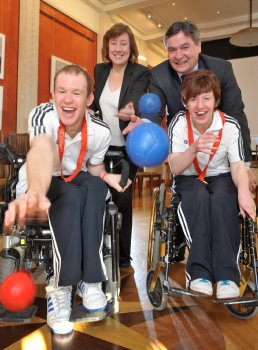 The University of Ulster is to host Northern Ireland's first qualifying event for the London 2012 Paralympics.

The 2011 CPISRA Boccia World Cup, which was launched today [Wednesday] at Stormont, will be held at the University’s Jordanstown campus from 18-27 August, with over 400 competitors and coaches from across the globe coming to the pre-games qualifier.

Boccia is a target ball sport from the same family as bowls and is a Paralympic sport for athletes with disabilities affecting motor skills.

University of Ulster Vice-Chancellor, Professor Richard Barnett, said: “As Ireland’s leading University for sport we are delighted to be hosting the 2011 Boccia World Cup.

“We will welcome sports stars from throughout the world to this tournament and hope, in the run up to the 2012 Games, we will welcome a lot more athletes to the University of Ulster and Northern Ireland.”

The multi-million pound sports facilities at the Jordanstown campus will stage the CPISRA (Cerebral Palsy International Sport and Recreation Association) World Cup with the successful bid from the University of Ulster-Disability NI, backed by GB Boccia Federation, fending off competition from as far afield as the USA.

The sporting venue has already played host to the 2009 Junior and Cadet World Fencing Championships and a host of international sports teams as a training venue, including the Italian national rugby team, Northern Ireland soccer team, and the Northern Ireland Commonwealth Games boxing team.

Joined by Boccia athletes in the Long Gallery at Parliament Buildings today, the Sports Minister Nelson McCausland highlighted that with under 500 days to go until the London 2012 Olympic and Paralympic Games, today’s announcement is the first of many his Department is expecting to make, showing that Northern Ireland is playing a significant role in London 2012.

He said: “Through this competition, from 18 - 27 of August this year, over 500 competitors and coaches, from over 30 countries will be in Northern Ireland to compete for qualifying positions in the 2012 Paralympic Games. My Department, through Sport Northern Ireland has been working with governing bodies of sport and local Councils for some time, targeting teams and athletes to visit Northern Ireland for events and training in the run-up to 2012. Many of those discussions are now bearing fruit, such as the Boccia World Cup.

“This summer we hope to announce a sailing event for Olympic teams and a further programme of Paralympic events. We are in discussions with several Olympic and Paralympic teams with an outlook to train here in Northern Ireland next year as part of their preparation for 2012, and details of these will be announced once necessary paperwork is completed."

‘“Being selected to host an international event, is a team sport in itself as demonstrated by the successful partnership approach of University of Ulster and GB Boccia, supported by Sport Northern Ireland and UK Sport. In fact, the University were chosen by GB Boccia as the preferred venue, above many Universities which were situated closer to London, including Surrey. The Boccia World Cup has previously been held in Vancouver and Lisbon and this year, it’s coming to Northern Ireland!”

Speaking at the World Cup launch, Cornelis van Eldik from CPISRA said, “The World Cup is a qualifying event for the London 2012 Paralympic Games and therefore the athletes require the highest standard of facilities and environment to prepare. CPISRA is delighted to bring the Boccia World Cup to Northern Ireland and to the University of Ulster at Jordanstown.”