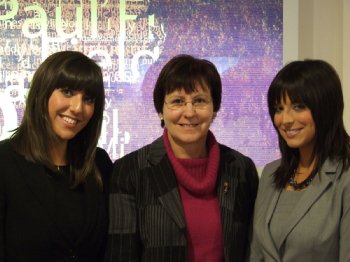 Two trainee solicitors from the Graduate School of Professional Legal Education at the University of Ulster's Magee campus have won the regional heat of the Client Counselling Competition organised by the Law Society of Northern Ireland.

Kathryn Stelfox from Portrush and Orlagh McMurray from South Belfast are currently in the last phase of their apprenticeship. Kathryn works with JB Stelfox Solicitors, Limavady, while Orlagh is employed at with PJ McGrory & Co Belfast.

As regional winners, both Kathyrn and Orlagh go through to represent Northern Ireland in next month’s international finals in Maastricht in the Netherlands.

The theme of the competition was ‘Professional Responsibility and Ethics’. Participants had to meet a ‘client’ who was played by an actress, and then, having taken her instructions, provide her with legal advice.

Congratulating Kathryn and Orlagh on their success in the competition to date and wishing them well for the finals, Director of the Graduate School for Professional Legal Education, Mr Paul Mageean said it was further evidence that the postgraduate professional solicitor training programme at Magee continues to go from strength to strength.

”This is a tremendous achievement by Kathryn and Orlagh and is a reflection of the hard work which they and the staff of the Graduate School have put in over the last year,” he added.

The initial intake of Law graduates who began their induction in August 2008 completed their professional exams to qualify as solicitors in August 2010. Prior to 2008, professional solicitor training was not available outside of Belfast.