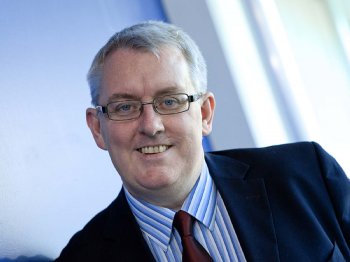 Professor PÃ³l Ã“ Dochartaigh, a German Studies expert and senior academic at the University of Ulster, has been elected President of the Association for German Studies in Great Britain and Ireland (AGS).

Professor Ã“ Dochartaigh, who served as AGS Vice-President for the last three years, is Dean of the Faculty of Arts at Ulster.

The AGS, founded in 1932 as the “Conference of University Teachers of German”, is the premier professional association for German Studies in these islands. The Association changed its name at its 2009 conference, which was hosted by the University of Ulster, the only time in its history that the conference has come to Northern Ireland.

Professor Ã“ Dochartaigh said: “I am thrilled by this election, which also reflects well on German at Ulster. Modern languages have struggled across the UK in recent years, with closures in a number of institutions, but Ulster has seen a significant rise in applications and we remain committed to the success of languages, including German.”

Professor Ã“ Dochartaigh is one of the leading academics in German Studies in these islands and has an international reputation as a scholar of German-Jewish literature and history.

His main research interest is in anti-Semitism and the legacy of the Holocaust in literature and society, not only in Germany but in an international context, including Ireland, Israel and the USA.

In recent years he has also undertaken pioneering work on the history of Celtic Studies as it developed in the 19th and 20th centuries under the strong influence of German scholars such as Zeuss, Kuno Meyer, Thurneysen and Pokorny.

Professor Ã“ Dochartaigh is a graduate of the Universities of Wales, Nottingham and Ulster. He was elected to membership of the Royal Irish Academy last year and he is also a Fellow of the Royal Historical Society.

He is a former Chair of the Royal Irish Academy’s Committee for Modern Languages and has published several books, including a history of Germany since 1945 and a biography of the German-Jewish Celticist, Julius Pokorny, as well as numerous research articles.

Caption: Professor PÃ³l Ã“ Dochartaigh, Dean of the Faculty of Arts at the University of Ulster, who has been elected President of the Association for German Studies in Great Britain and Ireland (AGS).