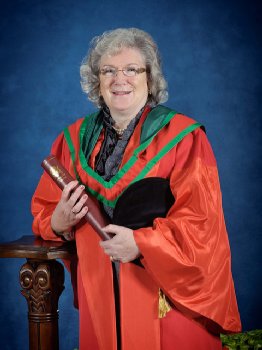 Sheelagh Hillan, one of the best known figures in pharmacy in Northern Ireland, is to receive the degree of Doctor of Science (DSc) for services to the pharmacy profession and public life.

Sheelagh has been a registered pharmacist for nearly 30 years, following her father into the family business – the pharmacy he opened has served the Randalstown community for over 62 years.

She is also heavily involved in the local community as a Director of the ARCHES (Assisting Randalstown Community towards Harmony, Empowerment and Success) community group which has sourced funding for several projects in the village. She is a governor of St. Benedict’s College and Dame of the Order of Malta.

Sheelagh served on the original Northern Health and Social Services Board and later on the Homefirst Community Trust. In her role as a member of the Board of Prison Visitors for Maghaberry Prison, she campaigned for proper pharmaceutical services throughout the Northern Ireland Prison System.
She has been Chair or President of all the major pharmaceutical bodies including the Ulster Chemist Association, Pharmaceutical Society of Northern Ireland, Pharmaceutical Contractors Committee, Pharmaceutical Committee of Central Services Agency, Department of Health, Social Services and Public Committee as well as serving on the Post Graduate Education Committee and is on the Liaison committee for the University of Ulster. She has represented NI Pharmacy at PGEU Pharmaceutical Group of the European Union and represented Northern Ireland pharmacy on the Council for Healthcare Regulatory Excellence.
She is on the Action Mental Health Board and a member of the NI Mental Health Review Tribunal and Health Service Tribunal.

In 2000, Mrs Hillan, who is widowed with four grown up children, was honoured with an MBE for services to the pharmaceutical profession. In 2006 she was awarded a fellowship for the Pharmaceutical Society of Northern Ireland.