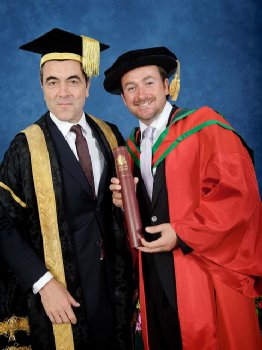 International golfer Graeme McDowell made his parents' dreams come true today when they watched him receive an honorary doctorate from the University of Ulster.

The Portrush man received the honour from the hands of fellow north Coast hero - James Nesbitt, Chancellor of the University, at a ceremony attended by over 1000 students, family, friends and academics at the Coleraine campus.

And he delivered a message of confidence and determination to the young graduates seated in the hall: "You've got to trust your own intuition; go for it, and don't look back.

He said: "Your courage and confidence to take on all comers, take on the world and beat it, are matched only by your humility and indeed your dignity with which you have conducted the last year - we are very proud - and of your unshakeable remembrance of where you come from."

Graeme McDowell wrote himself into the history books last year when he became the first professional golfer from Northern Ireland to win a major title in 63 years. The Portrush golfer is to receive the degree of Doctor of Science for his services to golf.

The US Open victory at Pebble Beach was one of the many highs in what was a phenomenal season for McDowell, who also clinched the Ryder Cup with the winning point for Colin Montgomerie’s European side against the US in Wales.

He has climbed steadily up the world rankings as a result of his success in tournaments on either side of the Atlantic last year, including a dramatic victory over Tiger Woods at the Chevron World Challenge in December.

Always proud of his Portrush roots, Graeme has enjoyed a distinguished career at all levels of the game – as a schoolboy, US collegiate, amateur and professional golfer.

As well as being passionate about the game of golf, he has shown tremendous dedication to charities, including the Multiple Sclerosis Society Northern Ireland and CRY (Cardiac Risk in the Young).  Graeme is also in near completion in setting up his own charity foundation called ‘The G-Mac Foundation’ to support children’s medical research.