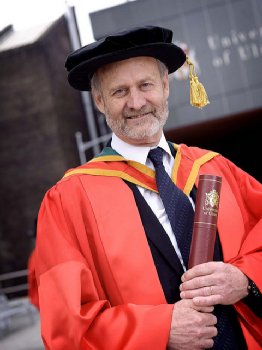 In recognition of his long and istinguished history of involvement in development work in Africa, Myles Wickstead is to receive the degree of Doctor of Laws (LLD) for services in promoting African development.

Professor Wickstead is a former Ambassador to Ethiopia and Head of the Secretariat for the Commission for Africa, which was established by Tony Blair when he was Prime Minister. At the G8 Summit in Gleneagles, Scotland in 2005 when the focus was on Africa and climate change, The Commission’s Report ‘Our Common Interest’ formed the basis of the G8’s Gleneagles communiquÃ©.

Based in Nairobi between 1993 and 1997, he headed the British Government’s Development Division in eastern Africa and oversaw development programmes in Kenya, Tanzania and Uganda. He co-ordinated the 1997 Government White Paper on ‘Eliminating World Poverty: A Challenge for the 21st Century’; served on the board of the World Bank in Washington DC between 1997 and 2000; and was the British Ambassador to Ethiopia and Djibouti from 2000 to 2004.