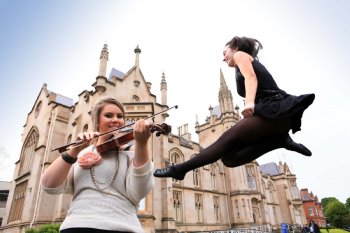 A huge international folk and dance festival is coming to the North West next year, thanks to an initiative by University of Ulster traditional music lecturer Dr Liz Doherty.

Hundreds of musicians and dancers and several thousand friends and followers will converge on Londonderry and Donegal next summer for the North Atlantic Fiddle Convention (NAFCo), with much of the action at the Magee campus and various venues around the city and Donegal.

It will be NAFCo’s first time on the island of Ireland. As well as generating a tourism bonaza, the convention could also provide an impressive curtain-raiser to traditional music elements of the UK City of Culture 2013 events in Derry.

Dr Doherty, who is convenor of the local NAFCo steering committee, said: “This is a massive statement of faith by experienced international musicians and researchers not simply in the traditions of the North West but also in our ability to host such a huge multi-faceted event.”

Harnessing the region’s rich fiddle and dance traditions and keen to enhance the profile of the traditional music programme at Magee’s School of Creative Arts, Dr Doherty formulated and tabled the successful bid to NAFCo’s international organisers. The Derry-Donegal NAFCo will be held June 27th – July 1st 2012.

“I am just back from playing at a big traditional music fest in Montreal and already people were talking about next year’s fiddle convention here and asking all about it,” she said. “They’re really excited and we’ll all be using the next few months to spread the word event further. It’ll be the ultimate fiddle fleadh.”

NAFCo draws participants from the US and Canadian east seaboard, Scandinavia, Britain and Ireland, Brittany and other Atlantic coastal regions that celebrate a heritage of fiddle and dance.

The Dance Research Forum of Ireland, which comprises teachers, researchers, academics and musicians, has also decided to hold its bi-annual conference here in conjunction with NAFCo.  The DRFI  presence will create even more colour and diversity, with not just Irish and Scottish dance but  other contemporary modes too.

Between 8,000 and 10,000 visitors are expected to flood in and practically every viable performance space will be utilised. It could be worth about £1.5 million to the local economy.

“The ‘joyous celebration and purposeful inquiry’ highlighted in the Derry City of Culture Bid document could almost have been written with NAFCo in mind,” Dr Doherty said.

“It completely sums up what this event is all about: celebrating through performances and participatory events the music and dance of the wider North Atlantic region and our Diaspora, and underpinning this with academic rigour, discussion and debate.”

Dr Doherty is well known on both sides of the Atlantic as a performance fiddler and recording artist, researcher of musical heritage and traditional arts consultant. She has published academic studies about the musical heritage of Ireland and Cape Breton Island in Nova Scotia, Canada. She was a keynote speaker at the 2010 NAFCo in Aberdeen.

TOP PIC CAPTION Dancer Michelle Curran and fiddler Maggie Maguire, music students at the University of Ulster’s Magee campus, set the tone for the ‘ ultimate fiddle fleadh’ as they celebrate the announcement that the five-day North Atlantic Fiddle Convention will be held in the North West in 2012. (Lorcan Doherty Photography, image supplied courtesy of NAFCo 2012) 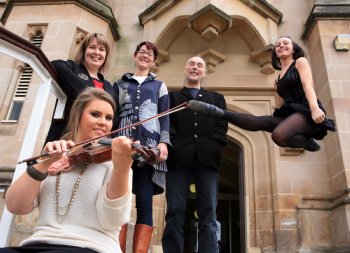