It's Never Too Late To Start Learning

Maureen McHenryBallycastle mother of six, Maureen McHenry, who graduates this week with a First Class honours degree in Environmental Science at the University of Ulster’s graduation ceremonies in Coleraine, is proof that it’s never too late to start learning.

It's Never Too Late To Start Learning 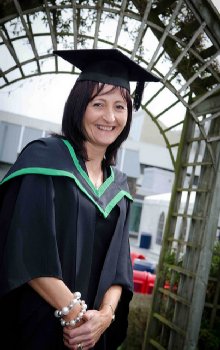 Ballycastle mother of six, Maureen McHenry, who graduates this week with a First Class honours degree in Environmental Science at the University of Ulster’s graduation ceremonies in Coleraine, is proof that it’s never too late to start learning.

In addition to achieving the overall top mark in the School of Environmental Sciences, Maureen was also awarded the Du Pont Award for the Best undergraduate dissertation. She now plans to return to Coleraine in September to start her doctorate research in Glaciology.

When she turned forty, Maureen says she decided she wanted to do something different. At the time she had been working with her husband in the family’s electrical business and was ready for a new challenge. So, with the support of her husband and four sons and two daughters - now aged from between 15 to 25 years, she took the plunge and went back to school.

She successfully completed the two year University of Ulster Access Diploma in Social and Life Sciences at the North West Regional College in Limavady and in the process won the Whyte Trophy for Achievement for getting highest marks on the course. This gave her the confidence to apply for a place on the BSc Honours in Environmental Science degree programme, and received a University of Ulster Opportunity Scholarship for academic excellence.

At the end of her first year as an undergraduate, Maureen was awarded The McCrea Leebody Science Award for academic achievement from the Faculty of Life and Health Sciences and she has never looked back.

“I have found my return to education as a ‘more’ mature student to be challenging but very rewarding. I would certainly encourage others thinking about it, to do just the same as I did”, says Maureen, who adds that she is really looking forward to September and starting her PhD research.

“I’ve always had an interest in the natural environment and the processes that have shaped our landscape so I’m really delighted to have been given this opportunity to return to university.”

Maureen’s enthusiasm for education has rubbed off on other members of the family. Her daughter, Catherine who is a Theology student at Queen’s, also graduates this summer while her son Liam is due to graduate from Ulster in December with an Accountancy degree. In addition her husband Cahal has just completed his University of Ulster Access Diploma in Social Sciences and is due to graduate in October this year. Her eldest son Ciaran is qualified as an Electrical Engineer, while another son, Cahal-Gerard graduated from Ulster last year in Construction Engineering and Management. The two youngest of the family, Noel and Jennifer are currently in A-Level and GCSE study.

“It’s been quite a few years for education in our house with GCSEs, A Levels, and Degrees, but thankfully everyone is on course to complete their education with a high level of success.”