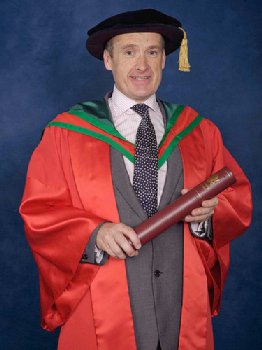 Hotelier Howard Hastings is chairman of the Northern Ireland Tourist Board and Managing Director of Hastings Hotels - the largest independent hotel group in Northern Ireland - which runs the Europa, Stormont, Everglades and Slieve Donard Hotels, the Culloden Estate and Spa and Ballygally Castle.

The company also owns the Merrion Hotel in Dublin. He is to receive the degree of Doctor of Sciences in recognition of services to the hospitality and tourism industries - following in the footsteps of his father and group chairman Sir William Hastings who was awarded an Honorary Degree by Ulster in 1986.

William Hastings already had a proven track record as a successful publican when established the family business in 1968. Howard was appointed Operations Manager in 1989 before taking over as Managing Director. He studied Law at Nottingham University and later qualified as a Chartered Accountant with Peat Marwick (now KPMG). He subsequently graduated with an MSc in Executive Leadership from the University of Ulster’s Business School.

Howard Hastings is a member and former chairman of both the Institute of Directors and the DEL run Future Skills Action Group. He is the founding Chairman of the Northern Ireland Hotels Federation and apart from one short break has been a member of Tourism Ireland - one of the cross border bodies established under the Good Friday Agreement - since its inception in 2000. He is also served on Investors in People, the New Deal taskforce and the Tourism and Hospitality Training Council.