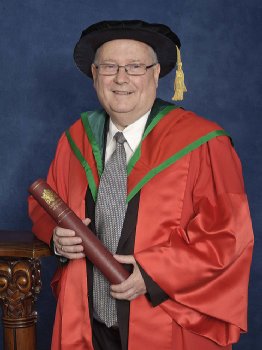 Frank Cushnahan, who is an independent Corporate Financial and Management Consultant, is to receive the Degree of Doctor of Science for services to commercial and business development.

A banker by profession, he has previously occupied, before retirement, Management Director positions in two leading financial institutions and is highly regarded among the business community both north and south of the Border. He has also undertaken a number of major government reviews which included project refinancing/restructuring and has earned a reputation of being a consummate ‘deal maker’.

Mr Cushnahan was also an advisor to the General Board Panel established by the Presbyterian Church to consider issues arising from the financial crisis related to the Presbyterian Mutual Society (PMS). In May 2010, he was appointed a member of the Northern Ireland Advisory Committee to the Irish Republic’s National Asset Management Agency (NAMA).

In 2001, Mr Cushnahan, who was educated at St Malachy’s College Belfast, was awarded the CBE for services to the Northern Ireland economy.