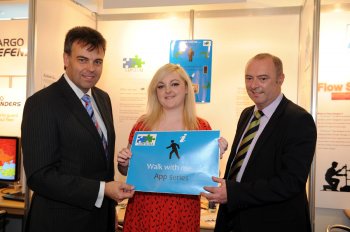 Ulster student Christina Finlay is celebrating today after winning an award at the Enterprise Ireland Think Outside the Box Awards 2011.

Christina Finlay, from the University of Ulster, Coleraine came second in the competition winning €3000 for her business Cordou. Cordou, already a registered company, has developed a series of apps that can provide technical support and information to sufferers of health conditions such as autism, and their carers.

Christina said:  "The vision of Cordou is to produce a range of apps that deal with health conditions by providing technical support and information to sufferers of autism and carers alike.

"One app called ‘Walk with me’ is a simple personal guide for an autistic person to carry with them as a visual step by step guide on a journey such as an airport. This app will instill confidence in the user and enable them to lead a more independent and self sufficient life."

A €2500 academic prize was also won by Dr Chris McLean, a lecturer from the University of Ulster, Coleraine in recognition of his high quality project and commitment to the awards. Chris’s teams from the Coleraine campus have won the competition twice in the last three years.

Held at the University of Ulster's Jordanstown campius. the awards, supported by Invest Northern Ireland, Enterprise Ireland, Cruickshank Intellectual Property Attorneys and Mammoth Advertising, have a total prize fund of €30,000 (£26,500). The awards aim to encourage students to explore their flair and talent for entrepreneurship and setting up a business. 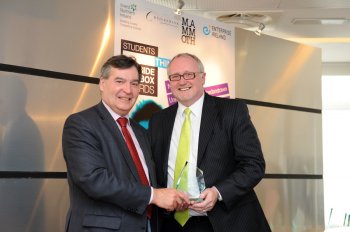