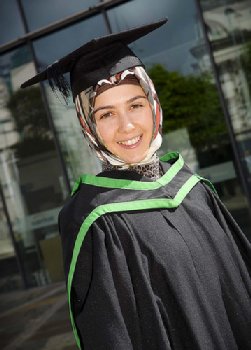 Arzu Mizrak today is awarded a degree in Linguistics at the University of Ulster’s graduation ceremony at the Waterfront Hall, Belfast.

She has had a long way to travel to get her degree. A native of Turkey, Arzu also studied for a year at university in Pakistan before joining the Linguistics with Communication degree halfway through first year.

Alongside her academic successes which have included a first class research project analysing linguistic features of Turkish conversation, Arzu has immersed herself in community life in Northern Ireland.

As well as being very involved in the University Chaplaincy, she became a member of the Northern Ireland Interfaith Forum. Through the Forum, Arzu was sent as a representative of Northern Ireland to Switzerland to give a seminar presentation about history and conflict in Northern Ireland.

Arzu completed the Dialogue for Peaceful Change Training Programme which prompted her to work in various conflict resolution roles in the local communities and she volunteered for the Northern Ireland Tolerance, Educational and Cultural Association as an event coordinator.

In her final year Arzu entered the British Council’s International Student Awards, Shine!, and was chosen by the judges as ‘regional runner-up’ for Northern Ireland. The competition attracted more than 1,200 entries from students from 118 nationalities.

Dr Catrin Rhys, Course Director of the BSc Language and Linguistics programme, said: “As an international student with an impressive level of commitment to her studies, Arzu has been a very engaging member of the class of 2012. She has taken every opportunity to apply her academic learning about language and communication to her experiences in inter-faith and inter-community issues and to bring her reflections back into the classroom. She has been a delight to teach and we are very proud of her achievements and wish her every success in her plans for future postgraduate study ”