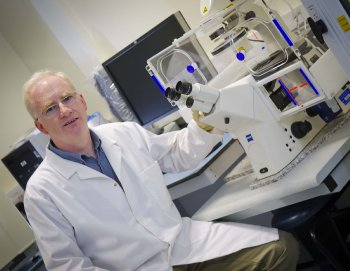 Scientists at the University of Ulster have joined a new international scientific alliance, working on the regeneration of human tissue and the growth of vital organs.

The University has signed a Memorandum of Understanding (MoU) in Tissue Engineering, which links six universities in Northern Ireland, Finland and America as part of an initiative established by the Northern Ireland Massachusetts Connection (NIMAC).

The alliance will allow researchers at the various universities to combine their respective efforts in advancing the study of regenerative biology, biomaterials, tissue engineering and other biology-related activities.

Brian Meenan, Professor of Biomedical Materials at Ulster (pictured above), travelled to the BIO2011 Conference and Exhibition in Washington DC recently to represent the University at the launch of the collaboration.

“This exciting NIMAC initiative provides for a strong axis of interaction between leading researchers in Northern Ireland, Finland and Massachusetts,” he said.

“The expertise and experience available via this collaboration will allow us to collectively address some of the key challenges to realising the potential of tissue engineering in delivering effective treatments for patients.”

Welcoming the establishment of the alliance Professor Norman Black, Pro Vice Chancellor for Research and Innovation at Ulster stated: “Participation in this strategic initiative reflects Ulster’s mission to further its international outreach and collaboration with those who can complement our expertise in biomaterials.

“We look forward to building mutually beneficial partnerships and delivering world leading research in tissue engineering which can benefit society.”

But with the new partnership that the alliance offers, they will now be able to discuss these issues with counterparts in Northern Ireland and Finland who may be experiencing – or have solved – similar problems.

“Researchers have been able to regenerate skin, but those at UMass Dartmouth are trying to do something more complex,” he explained.

“Skin is relatively very simple but, long range, we want to grow a kidney or even a heart.”

The strategic alliance came about as the result of discussions which took place during a NIMAC trade mission to Finland in April of this year.

In a letter of support to the MoU launch, Northern Ireland Minister of Enterprise, Trade and Investment, Arlene Foster, said the participation of Ulster and QUB was a great achievement for the organisation.

“Set up initially to strengthen business and research relationships between Northern Ireland and Massachusetts, NIMAC now includes Finland,” she explained.

“It is a fitting development, therefore, that this tissue engineering collaboration has resulted directly from the NIMAC trade mission to Finland, which was supported by delegates from Massachusetts and Northern Ireland.”

“These kinds of opportunities are exactly why we started NIMAC and that allows us to not only highlight the Commonwealth of Massachusetts internationally, but provide untapped avenues for future economic development efforts.”

As well as undertaking collaborative tissue engineering research, the initiative will be establishing an international exchange programme for PhD students and post-doctoral researchers.

It will also invest in technology-based ventures relating to the Finnish ‘Human Spare Parts’ programme involving undergraduate and graduate students and staff from partner institutions.

To further its aims, the alliance plans to jointly pursue research funding opportunities from targeted organisations such as the European Regional Development Fund, the European Commission’s Seventh Framework Programme, Tekes and other appropriate European and US sources.