Judith Hill, a former Chief Nursing Officer for Northern Ireland, is to receive the degree of Doctor of Science for services to nursing and palliative care. 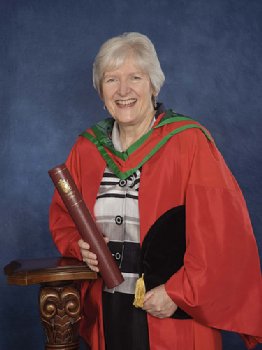 Judith Hill, a former Chief Nursing Officer for Northern Ireland, is to receive the degree of Doctor of Science for services to nursing and palliative care.

Judith began her nursing career at St Thomas' Hospital in London before making the move to nurse education, specialising in palliative care, progressing to become Nurse Director in both the Wessex and the South West Regional Health Authorities.

She took over as Chief Nursing Officer for Northern Ireland in 1995 and this role demonstrated an impressive commitment to the nursing profession and patient care. As CNO her achievements were significant; she developed the framework leading to the integration of nursing and midwifery education into higher education, oversaw the introduction of nurse prescribing, developed the guidance and assessment criteria for access to free nursing care within the independent sector, established the Northern Ireland Practice and Education Council for Nursing and Midwifery and chaired the Northern Ireland review of palliative care services. Her contribution to nursing during a time of great turbulence and change within the health service was recognised when she was awarded the CBE in 2000.

In 2005, Judith took on the role of Chief Executive of the Northern Ireland Hospice. Under her inspirational leadership, the hospice has been reinvigorated and propelled into a central role in the community serving adults and children.  Judith has been part of a consortium which includes the University of Ulster that has secured funding and established in 2010 the All Ireland Institute for Hospice and Palliative Care with the aim to improve the experience and understanding of these approaches through research, education and policy development.