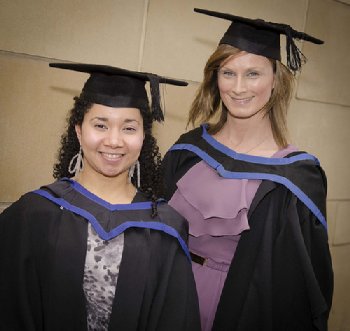 Esther Alleyne from Coleraine and Becky Laidlaw from Ballymena were both awarded a First Class honours degree in Dance at the University of Ulster’s Magee campus summer ceremonies in the Millennium Forum this week.

Although Esther started taking ballet lessons when she was just three years old, she only decided to study dance to degree level after she had already applied to university. She had originally applied to study History and Politics but at the last minute, opted to do a Dance degree instead.

“At the time, some people thought it was a strange choice but it was the right decision for me and I’ve enjoyed every minute of my time at Magee,” said Esther.

Esther’s second year placement was in the Waterside Theatre with the Echo Echo dance company. She maintained her links with the dance company by helping out with classes on a regular basis. She is now working with Echo Echo and later this summer, she will be performing in the company’s cultural legacy funded dance project: The Chess Piece.

Becky, who is originally from Newcastle Upon Tyne, also started out as a ballet dancer, but has since switched her focus to concentrate on aerial dance - where dancers hang from great heights by ropes and silks and walk on the walls of buildings at right angles to the wall.

A member of the Belfast based Bone Idle Circus Company, Becky already has a couple of public performances under her belt. She took part in the aerial dance performances at both the Crescent Arts Centre and City Hall in Belfast last year – she was a butterfly on the roof for the City Hall performance. She is currently rehearsing for an aerial performance this summer at the Ulster Museum building.

Becky is now hoping to do an intensive circus skills and aerial dance course with the Bone Idle Circus Company with a view to tutoring others in the specialist skill of aerial dance.

Launched in 2004, the dance programme at the University of Ulster is still the only the dance degree programme on the island.  Based in the historic Foyle Arts Building, Dance works closely with Music, Drama Design and Creative Technologies, giving students many opportunities to work collaboratively with other disciplines.

Congratulating Esther and Becky on their success, Dr Sophia Preston, course director of the BA Hons Dance said she was so pleased to see Esther and Becky’s talent, enthusiasm and sheer hard work come to such fruition and recognised with such excellent results.

“I think it is admirable that, while the External Examiner was particularly impressed by their written dissertations, both are most immediately taking up performance work.  I feel we really have succeeded in our ambition to enable them to become ‘thinking dancers’!”