All The World's A Stage for JP 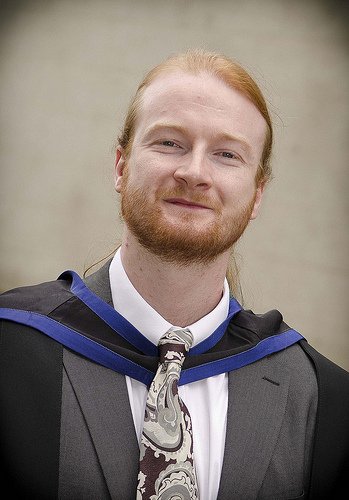 John-Paul Conaghan has reached an important stage in his career as a playwright.

He staged his play Solicitors at the Derry Playhouse Theatre last Saturday (July 2nd) and he takes to the boards today to receive a BA Hons in Drama at the University of Ulster’s Magee campus summer graduations in the Millennium Forum.

Now the 25-year-old Derryman, whose family name is steeped in the city’s tradition of pantomime, theatre and music, has revealed that he and fellow students have set up their own professional theatrical company. “Fahy Productions” will bring new writing to the stage, he says.

Known as “JP”, he lived in the Clooney Estate in the Waterside but now lives in the city centre. The youngest of seven children, he started out training as a brick-layer and joined the Magee Drama programme by winning entry-points in areas including lighting, sound, performance and stage, on a work and study course at the Derry Playhouse.

His passion for drama came from watching his father and uncle and an army of fellow volunteers doing all sorts of jobs in the highly successful Grove Amateur Variety Theatre Group’s pantomimes and musicals at the old Rialto Theatre, under the directorship of the late and much admired Tony O’Donnell.

JP wrote his first play aged 19. His move into third level education opened his mind to the wider possibilities of drama and created a new depth for his own writing output. Playwright Dave Duggan, who tutored JP and other students on play-writing, says they all produced work of a very high standard and demonstrated they were “committed to the craft of play writing”.

JP been commissioned to write a play for Lilliput Theatre Company, based in the Playhouse, for production early 2012. “I am currently working with Tinderbox Theatre Company,  Belfast on their Writers Lab which will run until the end of the summer.  Also during the summer I’ll be touring Solicitors, to summer festivals and feile North and South of Ireland.”