The University of Ulster has teamed up with Nahda University in Egypt to develop a research and teaching partnership for pharmacy.

A Letter of Intent has been signed between the two universities outlining the general principles of a partnership including degree validation, research collaboration and staff and student exchanges.

Professor Hugh McKenna, Dean of the Faculty of Life and Health Sciences at Ulster, and Professor Siddiq Afifi, President of Nahda University (NUB) signed the agreement on Professor Afifi’s visit to three of Ulster’s campuses.

Dr Ahmed Faheem, Course Director of PgDip/MSc Pharmaceutical Sciences, said: “Over the past few months, the Department of Pharmacy and Pharmaceutical Sciences has been discussing ways to engage with new student markets in the Middle East. NUB was identified as a possible partner to develop and further our links in the region.”

A leading figure in the Egyptian Society of Northern Ireland (ESNI) and a member of its executive committee, Dr Faheem helped organise Professor Afifi’s visit via an invite from Mrs Afaf Ali, the Chairperson of ESNI and a great friend to Ulster who is always seeking to develop cultural, political and educational links between Northern Ireland and Egypt.

“NUB is the only private university in Upper Egypt, and they are in a process of expansion and are keen to work with strategic partners in the UK to achieve excellence in teaching and research. They also aim to offer non-traditional study programs built around modern curricula,” Dr Faheem continued.

During his visit Professor Afifi visited the state-of-the-art facilities in the Department of Pharmacy and engaged in constructive discussions with the Head of Department Professor Paul McCarron, to consolidate collaborative partnerships.

Professor McCarron said: “Our approach in developing strategic relationships begins by identifying those close personal friendships that can then be nurtured into a more collaborative link.  It was clear from an early stage that the links between ESNI, NUB and Ulster were ones that we could exploit and given the high quality of the courses offered in the Department and School, such as the MPharm, there is now an excellent opportunity to work more closely with NUB on many academic fronts.”

While at the Coleraine campus, he also visited the School of Media, Film and Journalism, and its Centre for Media Research.

The President of NUB, accompanied by Professor Paul McCarron and Dr Ahmed Faheem, also visited Jordanstown campus and met with Professor Denise McAlister, PVC Teaching and Learning, to explore opportunities of proposed collaboration of joint venture between the two Universities.

Professor Carol Curran, the associate Dean of Life and Health Sciences, who helped organise the visit, gave an overview presentation to Professor Afifi about the University of Ulster during his visit to Jordanstown campus.

Also while in the campus, the President of NUB engaged in discussions with Professor Marie McHugh, Dean of the Ulster Business School and Dr Colin Turner, Head of the School of Engineering.

The highlight of the visit was when Professor Afifi visited Belfast campus to meet with the Vice Chancellor, Professor Richard Barnett, who confirmed the importance of the University's stated strategic aim to develop significant international partnerships to complement its research and teaching objectives.

At the end of the visit, both Professor McKenna on the behalf of University of Ulster, and Professor Afifi, President of NUB, signed the Letter of Intent between the two Universities.

Professor McKenna also presented Mrs Afaf Ali, the Chairperson of ESNI with a memento from University in recognition of developing educational links between Egypt and Northern Ireland. 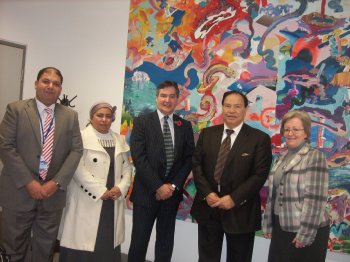