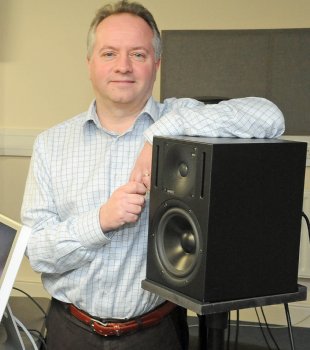 Frank Lyons, internationally acclaimed composer and Director of the Arts & Humanities Research Institute (AHRI) at the University of Ulster has been appointed Professor of Music in the University's School of Creative Arts.

Based at the University's Magee campus, Belfast man Professor Lyons was appointed Lecturer in Music in 2003 but his association with the University of Ulster goes back to 1992 when he enrolled at Jordanstown as a mature student to do a Certificate in Foundation Studies in Music.

After graduating with a BMus degree in 1995 he stayed on to do doctoral research and lecture part-time before being awarded a PhD in Music in 1999. Although his career trajectory was not what he originally planned and his route to Professor of Music somewhat unconventional, he believes his own experience gives him a special empathy with music students at Magee who come from very diverse musical backgrounds.

“I started out as guitarist and worked as a performer and session musician but when I was studying as a mature student, I got really interested in classical music and composition.”

Professor Lyons is keen to ensure that all musical styles are welcome at Magee.

“Some of the most innovative and diverse music programmes available anywhere in Ireland or the UK are offered at Magee. All kinds of musicians, from classical to jazz, Irish traditional, to contemporary rock and pop are welcome.”

The number of students applying to study Music at Ulster has more than doubled since 2003 when the School of Creative Arts was established at Magee and the programmes are now oversubscribed.

“Increasingly, students realise that developing a broad range of skills can enhance their career options after university. We have widened our provision, both in response to demand from students and to the changing employment market. In addition to more conventional modules in Performance and Musicology, students can take options in Music Business, Composition and Arranging, Music in the Community, Interactive Music Systems and Film Music, to name just a few.

“Music students also have access to a wealth of interdisciplinary opportunities in the School of Creative Arts and this equips them with a unique range of skills and experiences vital to any successful career in the creative industries.”

Key to the success of Music at Magee is the eclectic mix of musical styles catered for, coupled with state of the art facilities, expert tuition and unrivalled performance opportunities. Professor Lyons is keen to emphasise the importance of the many opportunities for public performance offered to Music students at Magee; students can perform with the University’s choirs, big band, traditional music group, new music ensemble, chamber ensemble and multimedia collective, to name a few. There are also lunchtime recitals and evening concerts, as well as events such as the Walled City Music Festival, City of Derry Guitar Festival and Trad on Campus Day.

Looking ahead, Professor Lyons says that Derry/Londonderry’s designation as UK City of Culture 2013 is a major boost for the arts and will provide a wealth of cultural opportunities for music students at Magee.

A number of ambitious collaborative projects with colleagues in the School of Creative Arts and internationally profiled performers are in the pipeline to ensure that both the City of Culture and the 400th anniversary of the city’s historic links with the City of London are marked in an appropriately musical fashion, which is hardly surprisingly given Professor Lyons’ reputation as a composer.

Over the years he has earned a well deserved international profile as a composer and researcher with performances of his works given in Australia, the United States, South Africa, and Europe and broadcast by the BBC, RTÃ‰, NPR and ABCFM. He has been Composer in Residence at the Summer School in Hjo, Sweden and the Shell Darwin International Guitar Festival in Darwin, Australia.

Professor Lyons’ most recent compositions were premiered earlier this year: Crosstalk was performed by New York based guitarist Simon Jermyn and the renowned Smith Quartet at the Sligo Music Festival and broadcast on BBC Radio 3; Stung, written for bass clarinet and live electronics, was performed in the National Concert Hall, Dublin, by Paul Roe, former Principal Clarinet of the National Symphony Orchestra of Ireland.

Earlier this year, he enjoyed global exposure with Simultaneous Echoes. This 3-D audio visual installation was created in collaboration with acclaimed media artist Masaki Fujihata and exhibited in Ireland, Poland, Canada, Germany and Japan and scooped a prestigious New Media Prize from the Japanese Agency for Cultural Affairs in March 2010.

Professor Lyons has also put his unique stamp on classics by rock legends Queen and Fleetwood Mac. The University of Ulster Choir, accompanied by the Ulster Orchestra and tribute band Flash Harry, performed his arrangements of iconic tracks by Queen before an audience of over 14,000 people in Belfast’s Odyssey Arena and other collaborative projects are planned for the New Year.

“It has been an intense but enjoyable time collaborating with so many different artists to create these new works but it’s great that creative practice from the University of Ulster is achieving such international reach.”

“The AHRI provides an institutional focus for research activity and collaboration across four research clusters in English, History, European Languages and Studies and Creative Arts and Technologies. In addition to Music, this embraces a range of subject areas within the Faculty of Arts, including Drama, Dance, Creative Technologies, German, Spanish, French, English and History.

"Nurturing and developing research in the AHRI towards REF 2014 will be the main draw on my energies over the next few years – and will provide a challenge which I will relish.”