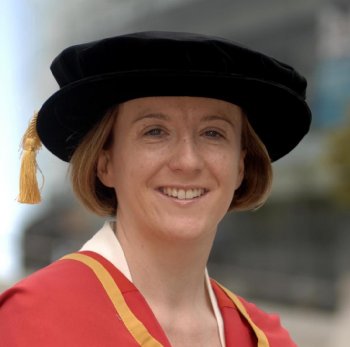 University of Ulster academic Dr Catherine O’Rourke has been awarded the Political Studies Association of Ireland’s 2010 Basil Chubb prize for the best PhD thesis produced in an Irish university in any field of politics.

“While there had been some discussion about the role of woman in transitional peace processes, there was very little empirical research and the issue of gender was generally not well understood. Catherine’s comparative study of the processes will lead to a much better understanding,” said Professor Bell.

The thesis was interdisciplinary, drawing upon both Transitional Justice and Politics of Transition literatures. Catherine’s Politics supervisor Carmel Roulston said that the work provided a unique and accomplished fusion of the two areas, providing a template for future studies of the legal and political challenges facing women in societies emerging from conflict.

After graduating from Queen’s University Belfast with an LLB (Law and Politics), Dr O’Rourke completed her Masters degree at the Gender Institute at the London School of Economics. She joined the Transitional Justice Institute at the Magee campus as a Research Assistant/Associate in 2004 and worked with Professor Bell on comparative analysis of peace agreements. In 2007, she moved to full-time PhD research within the TJI and relocated to the US to spend an academic year as Visiting Scholar at American University School of International Service in Washington.

As an advocate, she has been involved with the Amnesty International (UK) Stop Violence Against Women campaign, provided guidance to the Northern Ireland’s sector on the Bill of Rights drafting process, and participated in expert work by the International Center for Transitional Justice (New York) on gender and security sector reform.

The PSAI’s award is named after Basil Chubb, in recognition of his outstanding contribution to the research of politics undertaken in Ireland. After graduating with a history degree and doctorate in politics at Oxford University, Basil Chubb was appointed as lecturer in politics at Trinity College Dublin in 1948. In 1960 he was appointed Professor of Political Science, and first Chair of the new Department of Political Science at TC,  and he headed the department until 1991.

Widely described as the doyen of Irish political science, Basil Chubb is credited with the development of a popular interest in and understanding of the Irish political process.