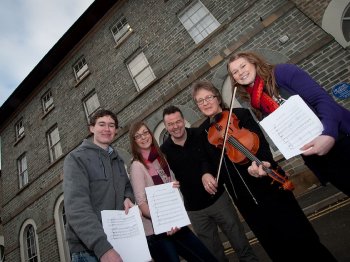 Screensound - an innovative film and music composition outreach project developed by the University of Ulster’s School of Creative Arts in association with the Ulster Orchestra - has been an outstanding success, according to Ulster’s Professor of Music, Frank Lyons.

Screensound was designed to give sixth formers who are studying Moving Image Arts, Music and/or Drama a unique opportunity to access University of Ulster facilities and expertise,  and to get a flavour of what it would be like to study at university.

The project brought together film, drama and music staff and students from the School of Creative Arts on the Magee campus in Londonderry,  professional musicians from the Ulster Orchestra and sixth formers from local schools including Lisneal College, St Cecilia's College, St Columb's College and St Joseph's Boys’ School.

Since last October, pupils from the participating schools have collaborated with lecturing staff and students from the School of Creative Arts to write, direct and edit seven short original films. This week, music students were invited to compose an accompanying original soundtrack for each film.

Professor Lyons explains how the entire creative process from its initial development through to public screenings of the films with an Ulster Orchestra ensemble playing the soundtracks, was overseen by a team of professional tutors from the University of Ulster, led by award winning composer and Visiting Professor of Music at the School of Creative Arts, Brian Irvine.

“The project was driven by the creative use of cutting edge technologies and we worked closely with each school group on the development of the films and the film scores. Our final year students shadowed the professional team and then visited the participating schools to act as mentors for the pupils and provide additional training and workshop sessions.”

The film scores were notated for real instruments and were performed live by members of the Ulster Orchestra at two specially organised film screening events in Derry/Londonderry at the Foyle Arts Building, Magee Campus on Friday January 28 and in Belfast at the Crescent  Arts Centre the following evening. Both performances were very well received.

Professor Lyons adds: “ScreenSound was an exciting opportunity for young filmmakers and musicians to meet professionals and benefit from their advanced, hands-on, film-making and composition skills with expert mentoring from key figures in the creative industries like Brian Irvine, as well as the opportunity to use the state of the art facilities available at the University of Ulster.”

Kristine Donnan from Belfast, a third year BMus student at Ulster said she thoroughly enjoyed being involved in the project – and although she admitted to being a bit apprehensive about hearing her composition being performed by the Ulster Orchestra, she was looking forward to the experience.

“It was absolutely brilliant and I would certainly recommend it. We’ve learnt so much from working with Brian Irvine and it was amazing to hear the Ulster Orchestra play something I composed myself.”

Lisneal College student Andrew Norris – who hopes to study Music at the University of Ulster next year - admitted that he was ‘blown away’ after hearing the Ulster Orchestra perform his original composition ‘Elevate’.

Andrew added that the feedback he got from both Brian Irvine who conducted the performance and from the musicians was really useful.

Like Kristine, he said it was great to hear his composition performed by ‘real people’ and the experienced helped him realise how effectively music can create or change the mood of the film.

“It was hard work but certainly worth it,” he said.