Flutes and Fiddles at the Dalriada Festival 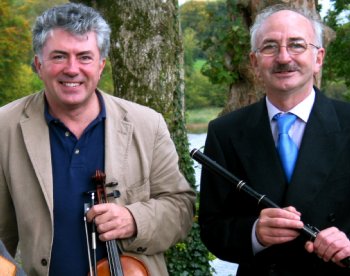 Two of Ireland’s most talented traditional musicians will celebrate the rich musical heritage of Ulster and Scotland during an evening of entertainment as part of the Dalriada Festival.

Cathal McConnell and Gerry O’Connor will take to the stage at the Octagon on the University of Ulster’s Coleraine campus at 8pm on Tuesday February 22.

Both performers have had long and successful careers in the music industry and are highly respected in the traditional entertainment circuit.

Cathal, a flute and whistle player, is a founder member of the acclaimed Boys of the Lough, whose music reflects the similarities and differences of the musical traditions of Ireland and Scotland.

An accomplished singer, the Co Fermanagh man has recorded over 20 albums and is renowned as much for his wit as his serious contribution to his musical repertoire.

And as a recent recognition of his talent, Cathal was last year awarded the Gaelic Language Television (TG4) Award for Singer of the Year.

Gerry ‘Fiddle’ O'Connor was born in Dundalk and learned his skills from his mother as well as from hand-written manuscripts passed down through the family.

In addition to his solo performances and acclaimed solo recordings, Gerry is the founding member of two popular traditional bands, Skylark and La LÃºgh.

He has also toured and recorded with the Irish Baroque Orchestra and is currently documenting Cathal’s formidable, unrecorded collection of Ulster song.

The Dalriada Festival has emerged as the result of a partnership between the Provost’s Office, University of Ulster, Coleraine campus and the  Causeway Arts Committee.

It’s committed to the promotion of arts events for local communities in Ballymoney, Coleraine, Limavady and Moyle Council areas.

A number of events are taking place throughout February and anyone interested in the history of the Dalriada area should make a note in their diary for the Flowerfield Arts Centre, Portstewart on Wednesday February 16 at 7.30pm.

Thomas McErlean, a maritime archaeologist at the University of Ulster, will explore the early medieval kingdom of Dalriada, which continues to generate great interest among Irish and Scottish historians and archaeologists.

He will deliver a fresh re-appraisal of the area based on new information derived from archaeological excavation and field survey as well as historical documentation.

For more information about further Festival events visit www.ulster.ac.uk for a brochure or contact the Cultural Development Office at the University of Ulster on (028) 7012 4449.