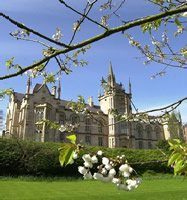 The University of Ulster today unveiled academic expansion plans for its Magee campus.

The plans will see:

- 350 additional undergraduate places for the campus

- a significantly expanded School of Nursing

- the creation of a new School of Irish Language and Literature

The development coincides with Employment and Learning Minister’s announcement of 322 extra full time undergraduate places for the university – all of which will be allocated by the University of Ulster to the Magee campus to deliver science, technology, engineering and mathematics (STEM) subjects.

Detailing the plans to staff, the Vice-Chancellor, Professor Richard Barnett,  said: “ In the current economic climate – and in the light of an £11m budget cut to the University, we have developed plans to rationalise our academic programmes.  We cannot afford duplication of provision.

“As part of our restructuring plan announced today,  Nursing Studies at Coleraine will move to join an expanded School of Nursing at Magee. In addition, a new School of Irish Language and Literature will be formed at Magee, bringing programmes currently delivered at Coleraine to Magee.

“We also propose to consolidate our teaching of History on the Coleraine campus, which will mean that history courses currently provided at Magee will migrate to our Coleraine campus.”

Professor Barnett added: “We are happy to accept the extra places in STEM subjects offered today by Minister Farry, though we are disappointed that they are so few, given the strength of the case we have made over the past three years for substantial expansion at Magee.

“ I put the Minister on notice – we will be back for more.”

The Vice-Chancellor said that the additional undergraduates at Magee in STEM subjects would protect jobs in those fields and could create demand for new posts in Intelligent Systems and Creative Technologies – two of Magee’s main strengths.

Provost Heenan said: "While the number of additional places offered by the Minister are disappointing, today's developments demonstrate our long-standing commitment to growth at the Magee campus.  We hope to create the new School of Irish Language and Literature in time to accept its first students in the next academic year."

Earlier, the Vice- Chancellor and Professor Deirdre Heenan, Provost and Dean of Academic Development at Magee met  Headmaster Jack Magill and Board Chairman Robin Young of Foyle and Londonderry College to mark the University’s decision to exercise its option to purchase College lands on Northland Rd.

The University has earmarked these 30 acres of land for future expansion when the College moves across the Foyle to its proposed new site at Clooney.