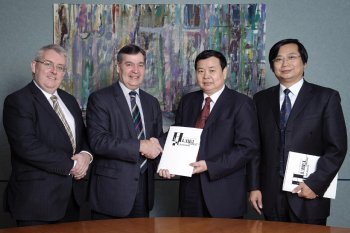 The University of Ulster is to team up with a Chinese counterpart topromote the teaching of Mandarin in Northern Ireland schools.

The initiative was one of three agreements the university has signedwith academics in eastern China, following the decision by the Chineseauthorities to locate a Confucius Institute at the University of Ulster.

The new Confucius Institute will be part of an international networkaimed at fostering cultural and business links with China.

Professor Pol O Dochartaigh, Dean of the Faculty of the Arts, said ofthe schools' initiative: "The University has signed three agreementswith Hubei Normal University, based in Wuhan in eastern China, whosespecialism is education.

"The first of these will see up to 40 teachers from Hubei province eachyear enrolling on Master's courses in the Faculty of Arts and the UlsterBusiness School as part of an initiative by the Hubei provincialgovernment to enhance the qualifications of teaching staff in thatprovince.

"Under the second agreement, Ulster will co-operate with Hubei NormalUniversity on a Confucius Classroom scheme for schools across NorthernIreland.

"Confucius classrooms operate in primary and secondary schools allaround the world including Great Britain and the Republic of Ireland.Given China's increasing power economically, we will benefitsignificantly in the future if we have a schools system which producesuniversity graduates fluent in Mandarin.

"Hubei's specialism is education, including the teaching of Chinese as asecond language, and under this agreement the Confucius Institute atUlster will seek expressions of interest in Chinese classroom schemes,with Hubei providing the teachers who will promote greater engagement inNorthern Ireland with Chinese language and culture."

He added: "The third agreement will enable researchers to come fromHubei to join Ulster's new Professor of Computer Science, Hui Wang, inthe development of a virtual Confucius classroom that is intended whenit is fully developed to be a valuable resource for the learning ofChinese no matter where in the world you are learning."

Earlier this year, the University signed an historic agreement with theConfucius Institute headquarters in Beijing to set up the ConfuciusInstitute for Northern Ireland at the University of Ulster (CINIU) inpartnership with Zhejiang University of Media and Communications insouth-eastern China.

CINIU, whose headquarters will be on the University's Coleraine campusbut which will also have an office in Belfast, is part of a network of370 Confucius Institutes in more than 50 countries across the world.

The institute will promote the teaching of Mandarin Chinese and study ofall cultures in China but also facilitate closer cultural links betweenNorthern Ireland and China.

CINIU, which will be formally launched next year, will also provideNorthern Ireland businesses and public sector organisations with bespokecourses on Chinese business practices, China's administrative culture aswell as language training.

"These agreements, which are spread across three faculties, are part ofwhat is sure to become an ever-increasing engagement with China. Thatengagement can only be to the benefit of Northern Ireland as a whole."