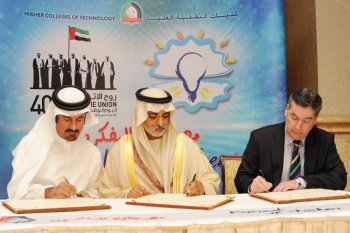 The University of Ulster's reputation for excellence in sports research and teaching has extended to the United Arab Emirates (UAE) where an historic agreement has been signed to deliver a new degree course there.

The BSc (Hons) Applied Sport Management, is the first degree of its kind to be offered in the UAE, thanks to a collaboration between Ulster and the largest provider of higher education in the country, the Higher Colleges of Technology (HCT).

The degree will be based at the HCT’s campus in Abu Dhabi and taught by lecturers from Ulster, working alongside academics from the host university, in a process of mutual collaboration to develop capacity in one of the world’s leading sports locations.

The Applied Sport Management course will be the first of a number of courses, including post-graduate programmes, to be offered at HCT in partnership with the University of Ulster.

Speaking about this exciting new partnership, Professor Barnett, said: “Ulster’s international reputation for sports-related academic research and teaching proved to be a decisive factor in securing this collaboration, which will also see postgraduate students enrolling at Ulster.

“The UAE government is committed to increasing the capacity of Emirati nationals in the management of sport to build on the substantial global reputation the country has earned in this field. It plays host to some of the world’s leading golf tournaments, a round of the Formula 1 championship, the richest horse race staged anywhere in the world and a variety of other major sporting tournaments. The UAE have selected the development of sport as a key economic driver and I’m delighted that the University will be working with them to supply the skills base required to deliver on this ambition.”

The agreement, which was sealed during the 4th Bi-annual Festival of Thinkers hosted by HCT, a renowned conference that plays host to a range of Nobel Laureates, draws upon the support of H.E. Mohammed Ben Sulayem, President of ATCUAE, which is the national motorsport federation within the Emirates.

Ulster already has a well-established link with ATCUAE in light of the work undertaken by Dr David Hassan, from the University’s Ulster Sports Academy.

Dr Hassan has been involved in research covering all aspects of motorsport for the past decade and recently joined H.E. Mohammed Ben Sulayem in a meeting with H.H. Abdul Rahman Mohammed Al Owais, the UAE Minister of Culture, Youth and Community Development to update the Minister on developments in the country and consider plans for future development.

Following the official signing ceremony, which was broadcast across a range of media platforms in the Gulf, Mr Sulayem said: “I would like to thank H.H Sheikh Nahayan for his support in this historic development. This agreement is the first of its kind in the UAE, and it will provide tremendous added value to ongoing sports investment and provide an opportunity to all those engaged in sports in UAE to advance their profession. This agreement is not limited to motor sports alone but to all sports, that’s why I encourage all sporting clubs and authorities to participate in this academic programme.”

Dr Kamali said: “A cornerstone of the Higher Colleges of Technology philosophy is the development of innovation in education, ensuring our students will have the skills of team work, adaptability, global awareness, and analytical thinking so that they make important contributions to the United Arab Emirates.”