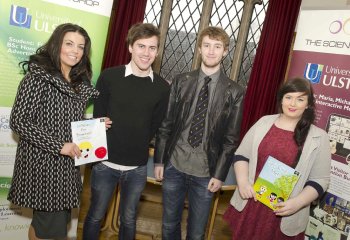 Students from the University of Ulster have scooped two top prizes in the prestigious 2010/2011 Science Shop Awards.

Lisa Coulter from Bangor, who studied Social Policy with Criminology at the Jordanstown campus, came first with her project on respite provision for Carers NI (Northern Ireland).

Second place was awarded to a team of Interactive Media Arts students from the Coleraine campus, who worked with the Belfast Giants ice hockey team to develop a programme to help teach children about cultural diversity and nutrition.

The Science Shop is a community research resource, which allows students from a variety of disciplines at the University of Ulster to work in conjunction with community and voluntary groups throughout Northern Ireland.

Each year awards are given to outstanding students for their contribution to projects involving their chosen partnerships.

“Not only does this work often go unnoticed, but there are also examples of inadequate support being provided by the statutory sector and unhelpful interventions by some professionals,” she explained.

“While acknowledging the good work that is being done and the benefits derived by current users of respite services, my study highlights the need for Health Trusts to revisit the issue of carer support, both in terms of the scale, reach and quality of services.”

One of the team, Emma Nicholl from Lisburn, along with Louise Little from the Foundation, produced two brightly illustrated books for key stage one children, exploring friendships and healthy eating.

Students Iain McAuley from Newtownabbey and Charlie Clements from Bangor created an interactive website which provides both animated versions and an audio soundtrack of Emma’s books.

Said Emma:  “The books are based on four characters – Finn McCool, the Belfast Giants’ mascot who is a role model/father figure to Finn McCool Junior and his two friends Molly and Connor.

“Myself and Louise Little used these characters to explore health, race and personality issues which affect children between the ages of five and eight.

“The idea was to help teach them about ethnic diversity and equality as well as healthy eating in a fun and exciting way, which would also appeal to their parents.”

Science Shop Manager Claire Mulrone congratulated the students on their success and said:  “Both of these projects will make a huge difference to their community partners, Carers NI and the Giants Community Foundation.

“The children’s books have now been published with help from the Giants’ main sponsor and are being used in a literacy programme taking place in 40 primary schools and libraries across Northern Ireland.

“This is a terrific result for the students and the Science Shop and demonstrates the real value and impact of Science Shops projects in the voluntary and community sector.” 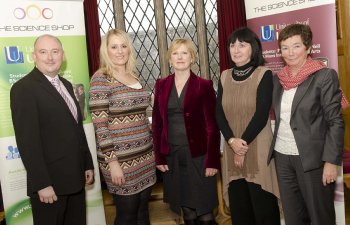