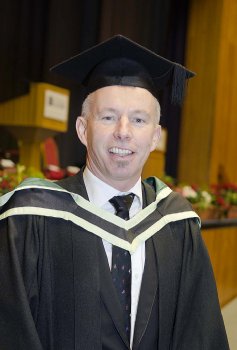 Michael Davidson, a bright light from Aberdeen now settled in Northern Ireland, has good reason to celebrate at today’s winter graduation ceremonies at Jordanstown, having scooped two major Nursing accolades during a one year part-time study course at the University of Ulster.

He receives a Postgraduate Certificate in Education for Nurses & Midwives, which he gained with a distinction. His work was of such high calibre that he was also the inaugural winner of the Valerie Morrison Memorial Award, for exceptional ability at both theoretical and practical levels of the course.

Michael, who started his nursing career in Scotland in 1986, is a Practice Education Facilitator for the Belfast Trust.

“I’m absolutely thrilled at getting the Post-grad Certificate. It’s something that I have for long aspired to and I’m very fortunate the Belfast Trust supported me in doing it,” he said.

He added: “I know that Valerie Morrison was so widely respected as a nurse educator and as a professional nursing role-model. Winning the award and receiving it from Valerie’s husband, David, who sponsored it, at the School of Nursing awards ceremony in November, has been a wonderful bonus. It’s the icing on the cake.”

Valerie Morrison held pivotal roles at many levels of nursing, from teaching and training to positions on professional standards and official advisory bodies. Among positions that she held after taking early retirement from nurse education in 1998, was a joint appointment with the University of Ulster and the Department of Health to promote the implementation of Diana Nurses in Northern Ireland. She was an Inspector with the Regulation and Quality Improvement Authority up until her untimely death on 6 November 2010.

Michael Davidson has worked in Aberdeen, Edinburgh, Belfast and Australia. When he first came to Northern Ireland in 2005 he started as a junior staff nurse at the Ulster Hospital, Dundonald, and became a clinical leader at a new cancer treatment centre in the Belvoir Hospital, and later at the City Hospital. He lectured in cancer nursing at the University of Sydney in 2006-07 and took up his current position with the Belfast Trust in 2009.

In his current role, he provides support for senior nurses, chiefly at the City and Children’sHospitals, who act as mentors to students in cancer services practice.

He said: “Many staff nurses provide mentorship to junior nurses and trainees. I act as a mechanism – a sort of safety valve – to make sure that the mentors have the proper training and the support to look after the students. It is all part of ensuring that patient care is always up to the mark.”