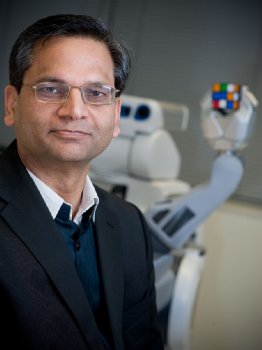 Professor Prasad is Leader of the Brain Computer Interface and Assistive Technology research team at the Magee-based Intelligent Systems Research Centre (ISRC), which is in the Faculty of Computing and Engineering.

The University of Ulster is ranked among the top universities in the UK for computer science research. In the last Research Assessment Exercise (2008), it moved up 34 places to 15th place out of a total list of 81 UK universities. Professor Prasad, who is originally from Gorakhpur in northern India, is one of the growing number of academics working on pioneering scientific research in Brain Computer Interface (BCI) and Assistive Robotics (AR) in the ISRC at Magee.

BCI technology enables people to interact with computers using their brainwaves. It has many applications in developing assistive robotic technologies to help people who are severely disabled, for example people suffering from neuro-muscular disabilities such as motor neurone disease or for those with limited mobility following a stroke.

A Chartered Engineer, Professor Prasad worked in industry before embarking on his distinguished academic career, which has earned him an international reputation as a respected researcher and author. He is currently involved in a number of multidisciplinary collaborative research projects with healthcare professionals to integrate BCI and AR and develop readily available and usable technologies that could lead to greater independence for people with disabilities.

He graduated in Electrical Engineering from the Regional Engineering College Calicut with first class honours before obtaining his MTech degree in Computer Science & Technology, also with first class honours, from the University of Roorkee. He subsequently received a PhD degree from Queen's University Belfast in 1997 and was research fellow there until his appointment as lecturer at Ulster in 1999.

He has successfully attracted significant financial support for a wide range of research projects funded by national and international funding agencies including Invest Northern Ireland (INI), Department of Employment and Learning (DEL), the Royal Society, and UK India Education and Research Initiative (UKIERI).

Commenting on his appointment, Dr Prasad said: “I am delighted and honoured in taking up the appointment and thank the University for giving recognition to my work through this. It provides me immense encouragement to contribute with renewed vigour to the exciting developments in Intelligent Systems research at the ISRC within the School of Computing and Intelligent Systems at the Magee Campus."

Offering his congratulations, Professor Liam Maguire, Head of the School of Computing and Intelligent Systems, said the appointment recognises Professor Prasad’s excellent research since joining the University of Ulster 12 years ago and was thoroughly deserved.