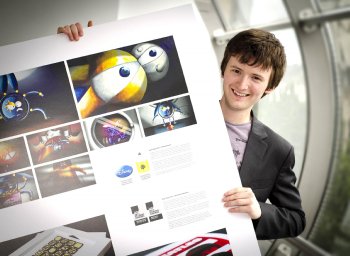 A University of Ulster graduate has scooped first prize in a prestigious Walt Disney-backed cartoon competition which attracted hundreds of entries from across the world.

Jonathan McKee wowed judges at the 2011 D&AD (Design and Art Direction) competition with his clever animation, The Dreamcatcher, inspired during a visit to China last year.

The 23-year-old from Dundonald has now been contracted by the famous Walt Disney Company to work on animated character designs for forthcoming TV shows.

Jonathan, who recently graduated from Ulster with a first class honours degree in Design for Visual Communication, explained the importance of gaining such an accolade.

“D&AD awards are seen as the Oscars of the design industry and I was overwhelmed to win first prize in the student animation category,” he said.

“The Walt Disney Company, in association with D&AD, asked students to create a 60-second animation incorporating a lead character which embodied the themes of hope and optimism.

“This character had to be of a unique design and appealing to children aged between four and 14-years-old.

“During a visit to China last year I heard the story of a make-believe ghost called Baku which children called upon to destroy their nightmares when they became frightened at night. That inspired The Dreamcatcher.

“The animation was entirely hand-drawn and hand-painted, depicting a battle between Baku and one of these nightmares, as it breaks into his owner’s home intent on eating the children’s dreams – but Baku has a clever plan to stop it.”

“As we were walking off stage he asked me to give him a call during the summer if I was free to do some work and I jumped at the chance,” said Jonathan, who specialises in graphic design, illustration and motion graphics.

“I contacted him and now have a contract to work on animated character designs for forthcoming Disney TV shows  – but I can’t give away any details!

“The company is based in London but we have regular video conferences. I send over drawings and they send them back with any changes and refinements.

“Feedback has been really positive and I hope to further strengthen my skills during a five day boot camp at the D&AD graduate academy which I’ll be attending at the end of the month.

“That could open up a whole new world of opportunities as it’s a chance to be spotted by some of the most influential names in the industry.”

University of Ulster Professor of Graphic Design John McMillan said: “Jonathan’s D&AD success reflects not only his talent but the intelligence, hard work and rigour that underpinned his study.

“To more fully express the breadth of his achievements in his final year we should note that he also gained a Merit in the International Society of Typographic Designer’s (ISTD) Assessment – the benchmark for student typographic standards.”

To find out more about Jonathan’s award visit: http://jonathan-mckee.com/#1539415/D-AD-Disney-Award