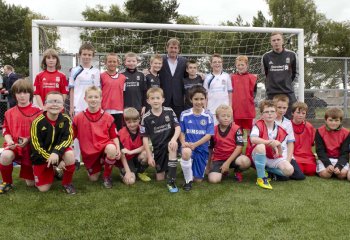 Liverpool manager Kenny Dalglish became the latest sports personality to give his backing to the CPISRA Boccia World Cup which will take place in Jordanstown later this month.

500 athletes, coaches, officials and their families will converge on the University of Ulster’s Jordanstown campus for the competition from August 20-26 which will serve as a qualifying event for the London 2012 Paralympic Games.

Dalglish said: “It is great that the University of Ulster is promoting disability sport in Northern Ireland by hosting the Boccia World Cup. No matter whether someone is disabled or not, sport is all about inclusion and participation and smiles on people’s faces. I wish all the athletes the best, and good luck for the competition.”

Dalglish was in Northern Ireland today to promote community engagement and disability sport and he visited competitors playing Power Soccer, a team sport for competitors who use power wheelchairs, in Ballynahinch, Co Down.


Boccia is a Paralympic target ball sport designed specifically for athletes with high levels of disability, including people with cerebal palsy. Similar to bowls, the aim in this highly tactical sport is for competitors to get the balls they aim as close as possible to a white target ball or jack.

Competitors must have the accuracy of a darts player, the geometric precision of a snooker star and the tactical nous of a chess Grandmaster and there are individual and team events which will see athletes compete against their peers in contests based on their functional ability.

It will be the first time the Boccia World Cup has ever been staged in the UK or Ireland and the competition will be the last opportunity for athletes to earn vital ranking points for the London 2012 Paralympic Games.

The event is being organised by the University of Ulster, Disability Sports NI and GB Boccia, has been sanctioned by the international governing body for the sport CPISRA and is receiving funding from UK Sport, Sport Northern Ireland, Newtownabbey Borough Council, Belfast City Council as well as Disability Needs NI, Deloitte, Northern Ireland Tourist Board and Belfast Business Visitor and Convention Bureau.

Dr Nigel Dobson, Head of Sports Services at the University, said Ulster was honoured to host the event.


“We are very excited about staging the World Cup and honoured to be hosting Boccia athletes from all over the globe,” he said.

“The University of Ulster is at the forefront of sporting endeavour and we want to make this competition the most successful Boccia World Cup yet.

“We are also delighted that Liverpool manager Dr Kenny Dalglish, who received an honorary doctorate from the University in July and is here to witness the Liverpool FC Football Academy soccer school in Jordanstown and open a new 3G pitch, has also taken the time to give his endorsement to the Boccia World Cup as fellow Liverpool legend Ian Rush did earlier this year.

Spectator tickets for the event are free of charge and are available from Disability Sports NI. Telephone 02890387062 or www.dsni.co.uk. 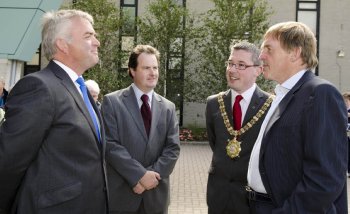 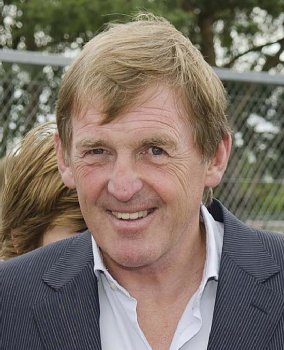