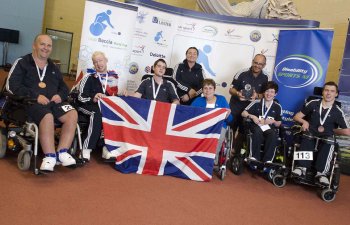 The GB team today picked up a bronze medal at the CPISRA 2011 Boccia World Cup at the University of Ulster.

A tie-break was needed for Team GB to edge their way past Thailand in the BC1/BC2 category, after a thrilling game at the University's Jordanstown campus.

After the win, GB player Zoe Robinson said: "The team was very happy to get the bronze medal after beating Thailand. However, we were disappointed not to make the final having lost on the final ball against Korea, who then went on to win the final and take the gold we were so close to getting. We'd like to get revenge at the 2012 Games."

Great Britain were commanding in the quarter-final beating Canada 9-0, before losing out to the Koreans in the semi-final. Korea then went on to beat Japan 8-1 in the final of the team event.

Over 200 wheelchair athletes from 33 countries are at the Jordanstown campus this week for the competition which is a qualifying event for the 2012 Paralympic Games in London.

Boccia is a target ball sport similar to bowls designed for people with high level of disability, which can be played as an individual, in pairs or as a three-a-side team.

The aim of the game is simple – to get your six balls closer to the white ‘jack’ ball than your opponents’. It is one of only three Paralympic sports that does not have an Olympic counterpart.

The individual and pairs competitions runs until Friday 26 August when the finals and medal ceremonies take place.

At Paralympic level the game is divided into four classifications. Classification exists in disability sport so that athletes compete against others with a similar level of functional ability. Players in the BC1, BC2 and BC4 classifications throw the ball onto court whereas the BC3 class use an assistive device called a ramp. All Boccia athletes have a disability that affects the strength and coordination in all four of their limbs and all competitors play their shots from their wheelchairs.

For further info on the 2011 Boccia World Cup, visit the official competition website at http://www.sportsulster.com/boccia2011.php

Spectator tickets for the event are free of charge and are available from Disability Sports NI: Telephone 028 9038 7062 or www.dsni.co.uk.

The event is being jointly organised by the University of Ulster, Disability Sports NI and GB Boccia.