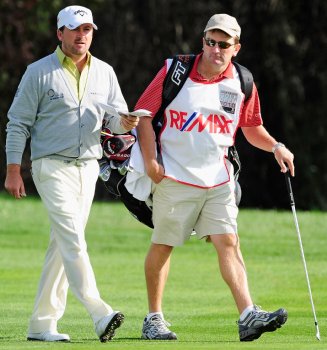 The Portrush golfer who became the first Northern Ireland professional to capture a Major title since Fred Daly’s British Open success at Hoylake in 1947 will receive a Doctor of Science (DSc) degree at a ceremony in the New Year.

Ulster Vice Chancellor, Professor Richard Barnett said: “We are delighted that Graeme has accepted an honorary doctorate after what has been an amazing year for him on both sides of the Atlantic. Like our Chancellor, he is a local lad who through passion and determination has achieved excellence on the international stage.

“He has been a terrific ambassador for Northern Ireland, Irish and European golf and has fulfilled the potential that many saw in him when he won the Ulster Boys Championship in 1996 and later the Haskins Award as the top collegiate golfer in the United States in 2002.

“I know people in his home club of Rathmore, in the Borough of Coleraine and Graeme’s family are justifiably proud of his achievements - particularly at Pebble Beach where he became the first European winner of the US Open since Tony Jacklin’s triumph in 1970 and only the second European winner since 1925.

“If that wasn’t enough, he also managed to win the Welsh Open at Celtic Manor and then seal the decisive matchplay win for Europe against the United States during a nailbiting climax to the Ryder Cup on the same course.

“As a university which is developing a strong reputation for nurturing golf talent and whose students recently enjoyed success in the European Universities Golf Championship in the Algarve, we are delighted Graeme will be joining Darren Clarke who received an honorary doctorate from us in 2002. The University’s golf programme also enjoys links to the Royal and Ancient Golf Club at St Andrew’s, the K Club and the Ulster branch of the Golf Union of Ireland.”

Graeme McDowell is a six time winner on the European tour. He first cut his teeth as an eight year old under the tutelage of his uncle Uel Loughrey at Rathmore Golf Club. Six years later, he represented Rathmore in senior competition and lined out for Coleraine Institution in the World Schools Championship a year later in Blairgowrie in Scotland.

His first big victory came as an amateur in the Ulster Boys Championship in Lurgan Golf Club in 1996.

He attended the University of Alabama in Birmingham on a golf scholarship between 1998 and 2002 and captured a number of amateur and collegiate titles on both sides of the Atlantic including the 2000 Irish Amateur trophy and in his final year, a total of six collegiate titles out of 12 events.

In 2001, McDowell was a member of the British and Irish amateur squad which retained the Walker Cup at Sea Island in Georgia.

He turned professional a year later, making a swift impact by winning only his fourth professional event - the Scandinavian Masters. His second victory came in 2004 at the Italian Open and he finished sixth in the European Order of Merit at the end of that season.

In the years that followed, the Portrush golfer played on both sides of the Atlantic but decided to concentrate on the European tour in 2007, in a bid to make the European Ryder Cup team.

In 2008 he made the team after capturing the Ballantine’s Championship in South Korea and the Scottish Open at Loch Lomond. Under Nick Faldo’s captaincy, he made a sparkling debut at the Ryder Cup in Louisville, Kentucky securing two and a half points for the European team but they lost to Paul Azinger’s US side.

In June this year, McDowell signalled his desire to return to Ryder Cup action alongside his close friend Rory McIlroy by winning the Welsh Open.

However he secured his place in the golfing history books by capturing the US Open title with an impressive final round performance at Pebble Beach, on Father’s Day as his dad Kenny looked on. The victory saw G-Mac, as his fans and fellow competitors know him, catapulted into a guest slot on NBC’s ‘Tonight Show with Jay Leno’ and a cameo in the HBO drama, ‘Entourage’.

McDowell capped an extraordinary year, with his performance at the Ryder Cup in Wales where he formed a thrilling foursomes and fourballs partnership with Rory McIlory. The two Northern Ireland golfers captured one and a half points out of a possible three before McDowell sealed the decisive point for Colin Montgomerie’s European side.

As well as being passionate about golf, Graeme McDowell is equally passionate about two charities – the Multiple Sclerosis Society Northern Ireland and the international humanitarian charity GOAL.