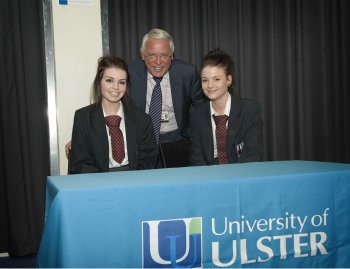 THE STEP-UP programme has unveiled its new range of engagement activities for year 8-12 pupils in the 2010/11 academic year.

The Engagement Programme was launched on the Jordanstown campus with an interactive lecture entitled ‘Silent Witness’ delivered by the State Pathologist, Professor Jack Crane.

Almost 500 pupils were taken on an enthralling journey as Professor Crane outlined the key role that a forensic pathologist plays in cases of sudden or unexpected death. The lecture also provided an insight into the scientific techniques used to determine the time of death and to identify the murder weapon.

Dr. Damian O Kane said: “We are delighted to have someone of the undoubted calibre of Professor Crane to launch this year’s Step-Up engagement activities. I have no doubt that this fascinating lecture will encourage many young people here today to view the role of science in a different light.”

A wide range of engagement lectures and competitions will be delivered throughout the coming year and include a virtual tour of the Aurora Borealis, building and racing hovercrafts and a Step-Up Science Fair.

The Step-Up engagement programme aims to raise pupil’s aspirations, expectations and academic performance enabling them to progress to higher education.

The programme is supported by the Department for Employment and Learning and The Honourable The Irish Society.