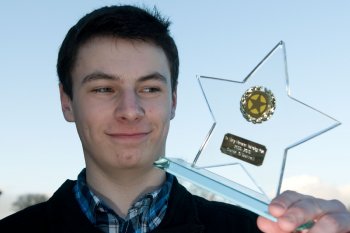 The successful links between students studying STEM subjects at the University of Ulster and potential employers in the north west were highlighted at the School of Computing and Intelligent Systems’ annual awards presentation at the Magee campus.

Awards were presented to nine undergraduate and two postgraduate students for outstanding performance in the 2009/10 academic year.

In recent years, the ongoing development of STEM courses at Magee has strengthened links with major international and national companies.

The awards, which are sponsored by the some of the major players in the world of computing and electronics, were introduced as a way to cement these links and develop even stronger working relationships between Ulster and the business community.

Senior representatives from companies sponsoring the awards attended the presentation.

Welcoming staff, students and industrialists to the event, Professor Liam Maguire, Head of the School of Computing and Intelligent Systems said the awards showcased the academic achievement of students on STEM courses at Magee and highlight the willingness of companies to promote excellence in computing and electronics.

He continued “This year we witnessed the largest ever intake to Computing degree programmes at the Magee campus and as a result we will now provide more STEM graduates for the workplace which coincides with the announcements for increased numbers of jobs in the ICT sector in Northern Ireland.”

The prizewinners included Donegal student Conor O’Donnell, a second year BSc Computer Science student. Conor, who is from Carndonagh, was presented with a number of awards for his excellent first year performance – his overall average for the year was 87%. He was placed second in the McCrea Leebody Science awards –.which are open to students from the other Computing Schools within the Faculty. In addition, Conor also won both the Liberty IT and the Lucid Interactive prizes for the top first year Computer Science student.

Runner-up in the Faculty’s BCS Medal and Prize was Lianlong Wu, a BSc Hons Computer Science student, for his performance in final year.Another student in SCIS won first place in the Faculty’s McCrea Leebody Science Awards for his performance on the BEng Computer Games Development course. Iain Carlisle from Banbridge in County Down received this prestigious award against stiff Faculty-wide competition. Iain also won the Lucid Interactive Prize for the best first year student on the Games course.

The Asidua Embedded Systems Prize was presented to Calvin Olphert, a graduate from the BEng Hons Electronics and Computer Systems course in July 2010. Calvin, from Limavady, received this award for his embedded systems final year project.

The Nallatech Student Prize for the top final year student in the BEng Hons Electronics and Computer systems course was won by Frances Laverty from Ballybofey in County Donegal. Frances graduated in July and is currently studying for her Masters degree.

Schrader Electronics present two awards each year for the top students in years 1 and 2 of the BEng Electronics and Computer Systems course. Andrew McFarlane from Dungiven won the year 1 prize, and Vivian Maynes from Cookstown won the year 2 prize.

The winner of the Kainos Prize for the final year BSc Hons Computer Science student whose project uses technology in the most innovative way and can be shown to be capable of working was Si Jing Liu from Fujian in China. Si Jing joined the degree course in final year, having completed her first 3 years at Fujian Normal University.Postgraduate prizes were awarded by 8over8 and Fidessa.

The 8over8 Prize is for the best student on the MSc Computing with Specialisms course, and was won by Kerri McCusker, currently employed in the Intelligent Systems Research Centre. Kerri completed the MSc Computing and Creative Technologies course.

The Fidessa Prize for the best student on the MSc Computing for Financial Services was won by Christopher Bennett.