Irish Boxing 'Can Only Get Better' 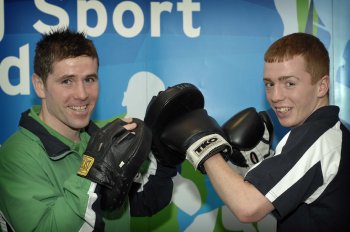 Boxing in Ireland is going to get tougher, which can only help improve our impressive feats on the international stage, according to Commonwealth gold medallist Eamonn O’Kane.

O’Kane was speaking at the University of Ulster Sports Scholarship presentations where 30 student sports stars were awarded Scholarships to help them in their sporting and academic endeavours.

“Boxing is going to get tougher and tougher. It will make it harder to stay at the top. The competition to stay at the top is very very tough and the fact is that it makes us strive to perform better and that’s the reason we are coming home with medals now,” he said.

O’Kane’s Commonwealth Games team mate Mark O’Hara followed in the gold medallists footsteps in picking up one of the prestigious Sports Scholarships which gives financial assistance to the student together with access to support services including, strength and conditioning, physiotherapy and workshops and provides students with a mentor, to help them balance their sporting and academic careers and assist them with any problems they may encounter along the way.

An Ulster graduate, O’Kane is also a European bronze medal winner, a peak he reached in 2008 and his success, he says, is in no small part to the help he received at the University of Ulster.

He said: “With the top professional advice the high performance team, the top coaches in strength and conditioning, top psychologists, they have all pushed us, all made us better boxers and that’s only going to filter through to the rest of the country and I can see us getting better.

“All the top facilities are here at the University. The Commonwealth Games boxers trained here a week before going out to India. The Scholarships are the sort of support that the athletes need to achieve big things in their sport and I can’t praise the University enough for this initiative and how it helped me.”

“It’s tough to find the balance between University work and sport but with the help and support of a lot of good people from the University of Ulster around upcoming student athletes just like I had then there’s no reason why they can’t go on and be successful.”

At the ceremony, Vice Chancellor of the University Professor Richard Barnett said: “The University of Ulster recognises the importance of sport and the achievements of our students who compete at the top level. The students are participating at such a high level that the University and its partners and sponsors are willing to support the programme to make sure that the Scholars get the most out of the excellent services at Ulster.

“We can see the benefits of the scheme with one of our graduates gold medallist Eamonn O’Kane here with us today and the University would like to extend our congratulations to him and wish him success in his future endeavours.”